Mention the word “Niagara” and the first thing that occurs to most people is Niagara Falls, of course. But this region, which straddles both the United States and Canada, is becoming increasingly well known for the quality of its wines.

Founded in 1979 by teacher, engineer, grape farmer,  and amateur winemaker Joe Pohorly on his family farm, Newark was the third winery at the beginning of the industry on the Niagara peninsula (after Inniskillin [1974] and Chateau des Charmes [1978]).

In 1982, Pohorly sold a majority share of the winery to a German company which changed the name to Hillebrand Estate Winery.   In 1983, Hillebrand was the first Ontario winery to successfully make icewine.  As icewine originated in Germany, I assume this was what the buyers had in mind for the acquisition.

In 1989, Hillebrand released Trius Red for the first time.  Inspired by Bordeaux blends, it was made from the winery’s best Cabernet Sauvignon, Cabernet Franc, and Merlot grapes.  Just two years later, in 1991, Trius Red was the first-ever Canadian wine named as the ‘Best Red Wine in the World’ at the International Wine and Spirits Competition in London, England.  The accolade marked an important step not only for the winery, but for the Canadian wine industry as a whole, sending a signal that the country’s wines could stand on their own against Old World wines.

Trius Winery, as Hillebrand was renamed in 2012,  is located in Niagara-on-the-Lake, Ontario, in the Niagara Escarpment AVA.  Long a cherry-growing area, about 30 years ago grapes began being widely planted there. Because of its northern location, at first glance this region hardly seems suited to quality winemaking.  However, the climate is moderated by lake effect* from Lake Ontario.  Also, the Niagara Escarpment, an approximately 600-foot-high ridge that runs from east to west through the Great Lakes, retards winds coming off the lake. This makes for good air circulation and helps protect the local vineyards from frost and disease. (The escarpment is most famous as the cliff over which the Niagara River plunges at Niagara Falls.) 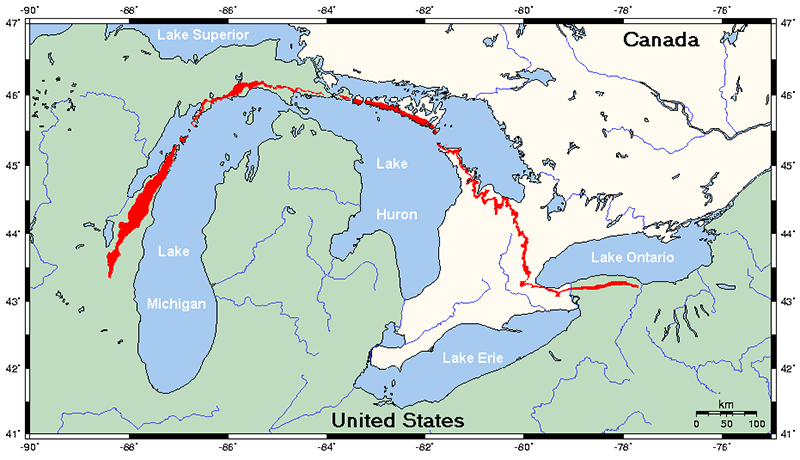 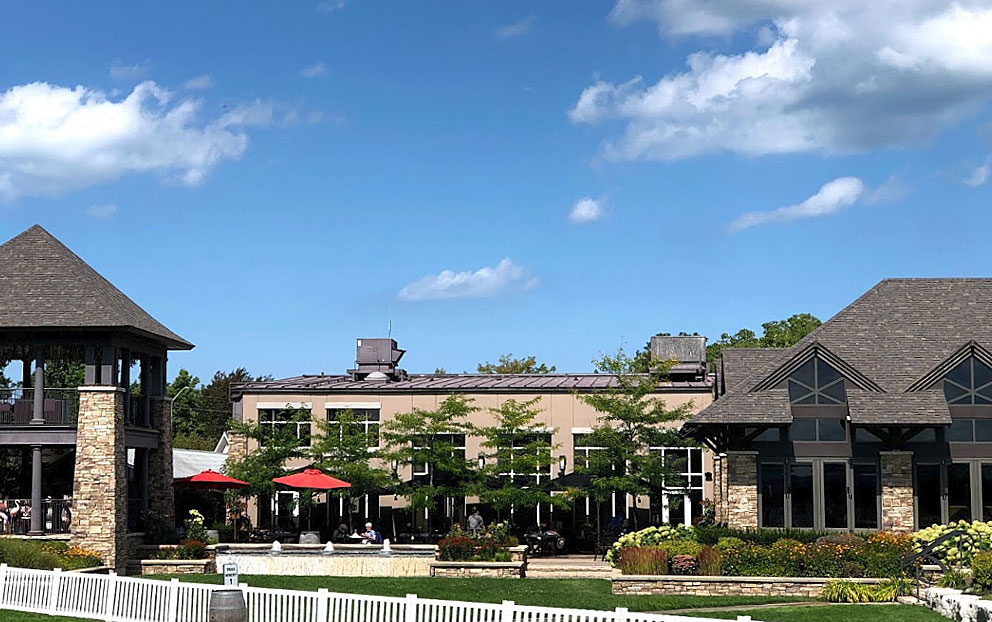 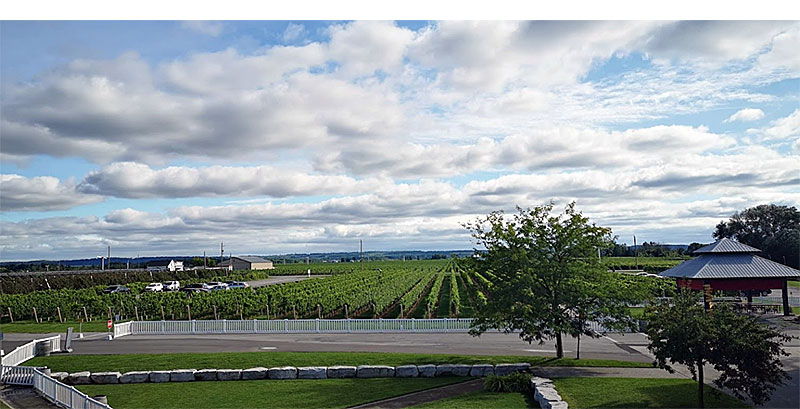 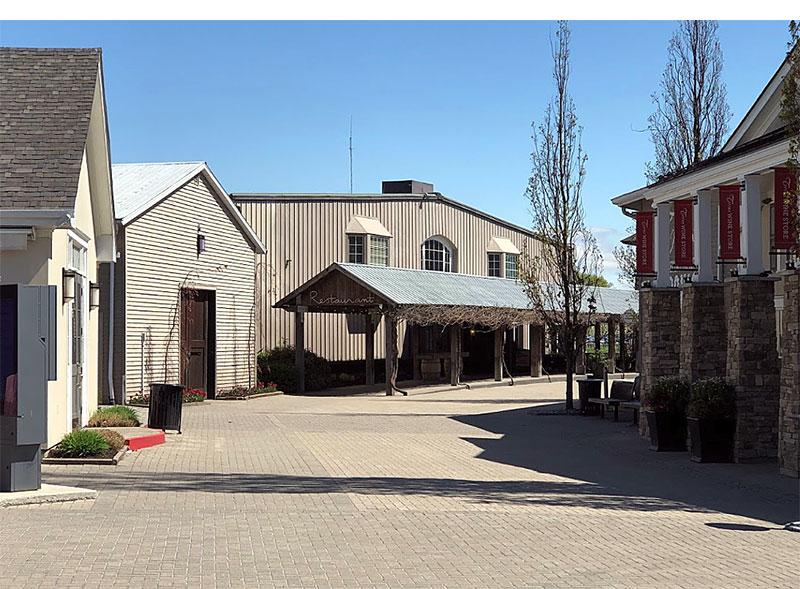 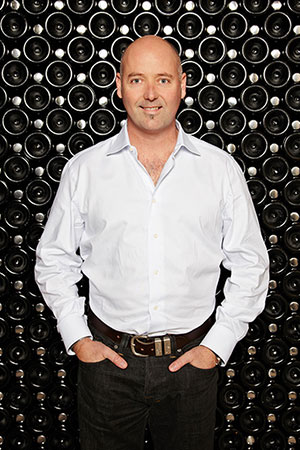 Australian Craig McDonald has worked at wineries in Australia, New Zealand, Spain, Oregon, and California. At one point on a trip to visit friends in Toronto, he made a quick detour to Niagara to check out the wine scene there. He was surprised by and impressed with what he saw and tasted. One of the wines he discovered on that trip was Trius Red.

McDonald became winemaker at Trius in 2010.  He noted, “I’m inspired by the fact that as a wine region we have so much untapped potential. Ontario wines keep getting better every year, despite the arduous conditions and challenges we constantly face. There is no sameness to our seasons, and we’re constantly adjusting our approach from grape growing right through the winery to blending.”

Andrew Peller first arrived in Canada from Hungary in 1927 to pursue his dream that Canadians, like Europeans, could produce premium quality wines.  (How he came to that radical conclusion, I have no idea.) To that end, he finally established Andrés Wines Ltd. in 1961. In 1964, operations were established in Calgary, Alberta and in Truro, Nova Scotia. In 1970 Andrés purchased Beau Chatel Wines in Winona, Ontario. In 1974 Andrés moved into Quebec with the founding of Les Vins Andrés in St. Hyacinthe. In 1975 Andrés bought the Valley Rouge Winery located in Morris, Manitoba. In 1994 Andrés acquired Hillebrand Estates Winery, which eventually would become Trius.  2006 marked the 46th year of the company, and the name was changed from Andrés Wines Ltd. to Andrew Peller Ltd. in honor of the founder.

Cabernet Franc is often used as a blending grape, but here it stands alone.  This medium-bodied wine was aged in a combination of French and American oak.  It pours a deep but transparent red.  The nose has bright cherry, a hint of spice (anise), and some subtle earthy notes.  It’s quite dry and rather lean on the tongue, with flavors of blackberry, cherries, and pencil shavings.  There are robust black-tea tannins.  It ends in a medium finish with a bit of cranberry bitterness.  ABV is an approachable 13%.

For now, Trius’ wines are unobtainable outside of Canada since the borders have been closed due to the Covid-19 pandemic.  Hopefully this restriction will be lifted by 2022 at the latest.

* As the spring growing season begins, the lake’s cooling effect retards the vines from budding until the spring frost season is over. The lake stores daytime heat as the growing season continues. The effect of the warming water lessens the variation between day and night temperatures, which can lengthen the growing season by as much as four weeks. As summer draws to an end, the stored warmth of the lake water delays frost that might damage  the vines or fruit in the early fall. In winter, the lake also causes heavy, moist snowfall, which blankets the vineyards, insulating and protecting the vines from the frigid air.

** BC VQA (Vintners Quality Alliance) is the appellation of origin and quality standard for British Columbia wine, established in 1990.  It has since been expanded to cover wines from Ontario as well.  BC VQA certified wines must meet standards with respect to their origin, vintage, and varietals.

Certain that mountain-side vineyards in Napa Valley could produce world class wines, in 1974 Robert Keenan purchased 180 acres in the Spring Mountain District at an elevation of 1700 feet. Located on the eastern slope of the Mayacamas mountain range, Spring Mountain District gained recognition as an American Vineyard Appellation (AVA) in 1993. The low vigor soils unique to the region were known to create a stressful environment for vine growth, setting up perfect conditions to encourage vineyards planted on the steep, rocky, mountainsides to produce wines of great concentration, structure, and pure varietal flavors.

The original acreage Keenan acquired included the crumbling Peter Conradi Winery, founded in the late 19th century and one of the first pioneering properties established on Spring Mountain. Peter Conradi had originally planted the vineyards to Zinfandel and Syrah, but they declined when the property was abandoned during Prohibition, and by the time Keenan arrived in 1974, none of the original vineyards were producing. Keenan cleared the estate of tree stumps and rocks, extended the original vineyard acreage, and replanted the property to Cabernet Sauvignon and Chardonnay. He built a new winery using the existing stone walls from the old Conradi building, and brought in Keenan Winery’s first harvest there in 1977.

Like many such operations, the winery is a collaborative affair. Keenan’s son, Michael, took over leadership of the estate in 1998. As a young boy, he was eager to learn about winemaking and began honing his winemaking skills “on the job” under the leadership of his father, as well as renowned winemaker Joe Cafaro. Michael Keenan works in concert with General Manager Matt Gardner, Cellar Master Aristeo Garcia Martinez, and Assistant Cellar Master Ricardo Segura. Matt has been with the estate since 1995. Together, they establish winemaking protocols, aging, and the finished style of Keenan wines. 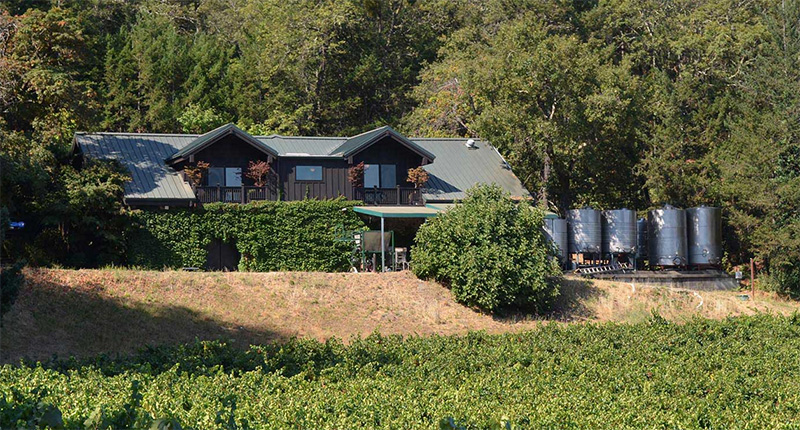 The Keenan’s son, Reilly, predictably has been immersed in wine culture from a very early age. He became a member of the team at age sixteen, and works during grape harvesting, hosts tastings for visitors on the estate, pours for wine events, and is the dedicated point person for many consumer and trade events.

This wine was produced exclusively from grapes grown on the Keenan Estate located in Napa Valley’s Spring Mountain District. The fruit was hand-picked then, after de-stemming, the must was inoculated with Montrachet yeast and fermented in stainless steel tanks. The wine aged in French and American oak barrels for twenty months.

A dark plum color in the glass, this Cabernet Franc has a nose of blackberries, black currant, and a hint of leather.  This is followed by tastes of bing cherries, and a bit of cedar, cocoa, and dust. There is snappy acidity and somewhat recessive tannins, all wrapped up in a medium to long finish.  Let this wine breath for two hours for maximum enjoyment.