Welcome to this wine buyer’s guide for the curious wine enthusiast.  It’s one wine guru’s journey towards enlightenment.  Or at least, towards wine worth drinking.

The audience I am writing for are people who enjoy drinking wine, and yet don’t know much about its nuances. However, you are curious about the history and specifics of the wines you like. Wine snobbery and collection holds no appeal for any of us. As far as I’m concerned, 100-point rating scales are nearly irrelevant and meaningless, except to usually make us feel clueless. You have never heard of Robert Parker, and couldn’t care less.  You are looking for good-value wines that sell for between $12 and $25 a bottle, although you may push that up to $75 for a very special occasion. You lean towards New World producers. You would like to explore Rosés, but are skittish because of the White Zinfandel your aunt let you try when you were a teenager. You are open to new wine types in general, but recognize you will always rely on a few favorite styles. You would be delighted to discover that Champagne and sparkling wines are not just for New Year’s Eve, and would be almost as happy to learn that there is a difference between Champagne and other sparkling wines.

A NOTE ABOUT VINTAGES

Content may be used for non-commercial use only. No modifications allowed.

Attribution required in the form of a statement “originally published by
Winervana” with a link back to the original posting.

All products featured on Winervana are independently reviewed without compensation.

Pio Cesare [pee-oh chez-are-eh] was founded in 1881 in Alba, in the Piedmont region of northwest Italy by Cesare Pio. Alba is known for its white truffles; the Gothic Alba Cathedral with a bell tower that overlooks the city; and the Church of San Giovanni Battista, which contains artworks from the 14th century onward. Pio …

END_OF_DOCUMENT_TOKEN_TO_BE_REPLACED

I have been aware of Orin Swift wines for some time, especially The Prisoner, but had never had the chance to try any of them, so I was intrigued when a friend brought over this selection.  He is adamant that “all wines from California are inferior to any wine from Europe, especially Spain!” so I …

END_OF_DOCUMENT_TOKEN_TO_BE_REPLACED

I have nine pizza cookbooks, and seven of them have  a recipe for Pizza Margherita.  In part this is because it is a classic, and in part because the story of its creation is clearly known and iconic.  In 1889, the Italian royal couple King Umberto and Queen Margherita paid a visit to Naples.  While …

END_OF_DOCUMENT_TOKEN_TO_BE_REPLACED 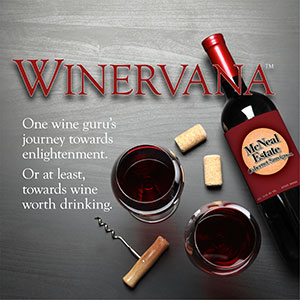 Welcome to the Winervana podcast!  People and topics of interest to the curious wine drinker.

No pretense.
No snobbery.
No numerical ratings.

Hosted and toasted by
Stephen Hawk.

The Winervana podcast is produced by Habanero Media.

Jim Laughren is a Certified Wine Educator, a member of the Society of Wine Educators, and the award-winning author of 50 Ways to Love Wine More and A Beer Drinker’s Guide to Knowing and Enjoying Fine Wine. He is known for his irreverent approach and abiding enthusiasm for all things fermented. He is founder of Chicago-based WineHead Consulting and a former importer and distributor of fine wines from around the world.

Paul Wagner has dedicated his life to wine as an educator, award-winning author, competition judge, guest lecturer, owner of a wine-marketing firm, consultant, magazine columnist, and public-radio personality.  In this episode he discusses his teaching approach, and provocatively debunks a major myth about wine.

One of a growing number of women in the world of wine, Nicole Walsh is both the winemaker and owner of the boutique Ser Winery near Santa Cruz, California.

Brian Carter is one of the pioneers of the Washington State wine industry, having worked there for over 40 years.  He is a champion of the art of blended wines, as well as sustainability.

Brandy is one of the world’s oldest distilled spirits.  Learn about what it is, plus what distinguishes its best-known subgenre, Cognac, and Cognac’s lesser-known country cousin, Armagnac.

My second guest on the Winervana podcast is me! My long-time friend Rob Young sits in the host’s chair, and we talk about varietal-specific stemware made by Riedel, and why you should consider buying some of these glasses.

Few products of human labor are as old as wine. With such a rich history, quite a lot of facts and foibles have come to be associated with it. I touch on just a few of those in this episode.

The wine universe is huge, and goes way beyond the usual varieties.  Some creative winemakers don’t even use grapes at all!  Learn more about some wines you’ve probably never heard of in this episode.

Beer and wine are readily available for purchase at a full range of quality and price points.  But some people choose to make their own.  My first-ever guest Pat Helmers explains why you might want to do the same.

Chardonnay is great, of course, but when the weather is warm, it’s not often the best choice.  You want something crisp and refreshing.  You want ABC: Anything But Chardonnay.  In this episode, I discuss grape varieties and some specific suggestions from around the world for perfect summer sippers.

Yes, wine in cans is a thing. A very big thing as it turns out. Although canned wine has been around for almost 20 years, it has seen explosive growth since 2015. You can hear the story in Episode 4.

Is there a difference between wines from the Old World (Europe and the Middle East) and the New World (everywhere else)?  If so, does it matter?  Find out in Episode 3.

Ordering wine in a restaurant can be intimidating, but it doesn’t have to be. Stephen shares some tips on approaching the wine list, and how to get help if you’re uncertain.  But mainly, he rants about the wine price gouging far too many restaurants are guilty of.

Stephen introduces the Winervana podcast. He explains his point of view on wine and how it frames the podcast. He shares his story on how he became interested in wine. And, reviews a Chardonnay.

Like any area of interest, the wine world includes many words and phrases that may be unknown or misunderstood by people just beginning to explore wine (or even those with more familiarity).  Here are a few that I think every educated wine drinker should be familiar with:

For more on these and many more wine-related terms, see The New Wine Lover’s Companion by Ron Herbst, which I used as the source material for this list.

Welcome to the Winervana videos! Wine reviews for the curious wine drinker.

No pretense.
No snobbery.
No numerical ratings.

There are thousands of different glasses you can use to drink wine, from Solo cups to hand-blown crystal.  Does it matter which one you use?

You can see images of the stemware here.