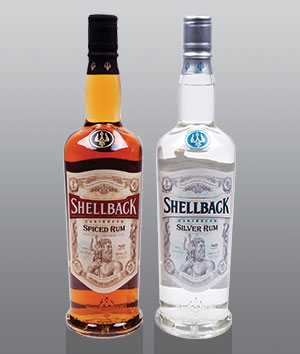 Historically, ‘shellback’ was a title bestowed on mariners who crossed the equator, a risk-filled achievement in the days of wooden ships under sail.

There’s no risk in this Shellback rum, part of E&J Gallo’s foray into the liquor category. To produce this offering, they have partnered with West Indies Rum Distillery, which has been making the spirit since 1893 on the island of Barbados, the birthplace of rum.

Both Shellbacks are a blend of neutral and heavy unaged rum distilled with a mix of continuous and pot stills.

Shellback Silver features a suggestion of vanilla and tropical fruit. It has a distinct sweetness, a silky mouthfeel, and a medium finish. Shellback Spiced builds on that vanilla-accented base with the addition of cinnamon, ginger, clove, nutmeg, cassia, and allspice. The Spiced is then aged for a minimum of 12 months in used-once bourbon barrels, for a rounder mouthfeel and lingering finish.

Good on the rocks, Shellback rum also works well as the key ingredient in rum-based cocktails, such as a Mojito or Daiquiri.

Both of these rums are 40% ABV and are widely available.