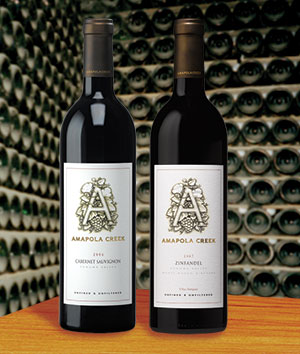 From Korbel he moved on, first to United Vintners, then Sonoma Vineyards, and in 1974 was chosen by the founders of Chateau St. Jean Winery to become their first employee and winemaker.

The peripatetic Arrowood then moved on once again; he opened his newest winery, Amapola Creek, in June, 2010. The 120-acre ranch (purchased in 2001) that is home to Amapola Creek is situated on the western slope of the Mayacamas Mountains, which rise between and separate the Sonoma and Napa valleys. Although Alis envisioned the site as the place for a peaceful retirement, Richard had other ideas, and immediately set about selecting the best 20 acres of the property for use as the foundation for Amapola Creek Winery.

Arrowood claims he’s “saved the best for last.” Perhaps he’s right; after making quality wine for over 45 years, he says his quest now is to make his greatest wines ever.

The gnarly old vines made for a truly distinctive Zinfandel. It is dark plum in color, befitting its nicely balanced flavors of dark stone fruits, black cherry, and blackberry. The taste is supported by supple tannins and good acid, as well as just a hint of sweetness. And, there is no pepper on the palate, which is just the way I like my Zins.

The organically-farmed estate vineyard for this Cabernet borders the one from which comes the Zinfandel, so the soils and climate are nearly identical.

This is just the second Cabernet released by Amapola. The grapes were hand-picked, and pressed after fermentation. The wine was then aged for 26 months in new and seasoned French and American oak. It is neither fined nor filtered.

This elegant wine shows excellent harmony and structure. The taste features ripe blackberry, plum, and currant. The fruit is offset by a pleasing dustiness, and supported by restrained tannins.

Here’s another look at Amapola Creek: