Pio Cesare [pee-oh chez-are-eh] was founded in 1881 in Alba, in the Piedmont region of northwest Italy by Cesare Pio. Alba is known for its white truffles; the Gothic Alba Cathedral with a bell tower that overlooks the city; and the Church of San Giovanni Battista, which contains artworks from the 14th century onward.

Pio Cesare is one of the oldest wineries in the region and one of the first to export their products. Pio, a successful entrepreneur, was inspired to produce a small and select quantity of wines from the hills of Barolo and Barbaresco for himself, his family, friends, and customers. He was dedicated to the terroir of the Piedmont region and to producing wines of the highest quality. The operation is still owned and run by the fifth-generation of the original family, now led by Federica Boffa and her cousin Cesare Benevenuto. “When Pio Cesare began in 1881 there were four or five producers of local wines,” explained Benevenuto. “Now there are over 600 producers in Barolo and Barbaresco, but Pio Cesare is the only one in the city center of Alba.”

Pio Cesare produces five single-vineyard wines, which are only produced in select vintages. There are also more generic offerings of Barolo and Barbaresco, as well as Langhe Nebbiolo wines, Dolcetto d’Alba, Barbera d’Alba, Grignolino, and Freisa. The range of white wines includes a Gavi and one of the best-regarded Arneis wines in Piedmont, and is led by the single-vineyard barrel-fermented Chardonnay Piodilei.

Cesare Pio’s entrepreneurial spirit drive him to travel throughout Europe in the early 20th century to publicize and promote his wines. His passport, which is proudly displayed at the winery in Alba, bears the number 55. 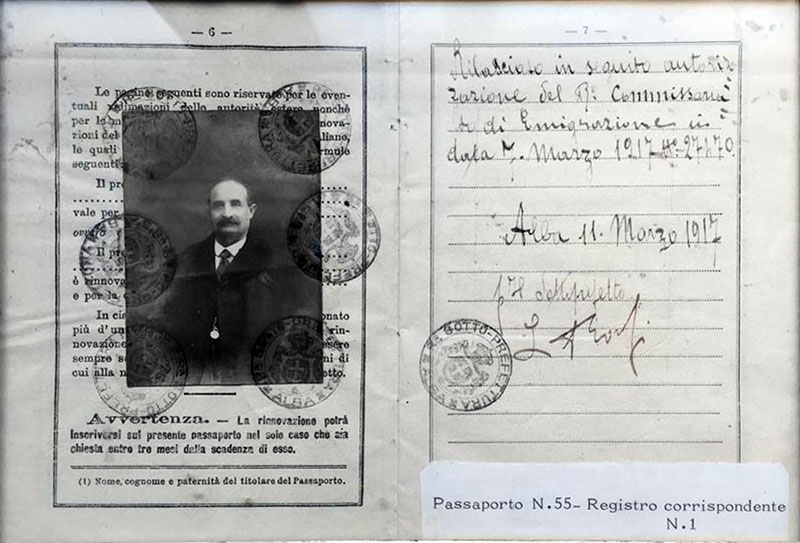 His son, Giuseppe Pio, was lucky enough to inherit a thriving winery at the turn of the 20th century. He carried on his father’s mission and invested in expansion of the cellars and the business, making Pio Cesare a benchmark brand for the wines of the region.

In 1940, Giuseppe Pio’s only child, Rosy, married Giuseppe Boffa, a young  engineer from Alba, who managed a large company in Milan at the time. When Italy entered the travails of the Second World War, Boffa decided to leave his job in Milan and dedicate himself to the Pio Cesare winery. After the war, the Pio Cesare brand rose in fame and prominence both domestically and internationally, becoming one of the most respected names among Italian wine producers, with a special focus on its renowned Barolo.

Rosy and Giuseppe Boffa named their youngest son Pio, in honor of his great-grandfather. The late Pio Boffa was joined by his cousin Augusto in the early 1990s. Boffa’s sister’s son, Cesare Benvenuto, has been active since 2000 as the fifth generation, and Pio Boffa’s daughter, Federica, is now part of the enterprise as well.

“In the 1970s my grandfather and father started buying vineyards,” said Federica. “It was a big change.” She said that the strategy they employed was to buy vineyards from which they were already sourcing grapes, which kept a continuity in the wines. They now own a substantial 185 acres [75 hectares] in Barolo and Barbaresco, including holdings in the famous Ornato vineyard in Barolo and Il Bricco in Barbaresco. Fruit for Pio Cesare wines is also sourced from managed vineyards under long-term contracts with local growers. 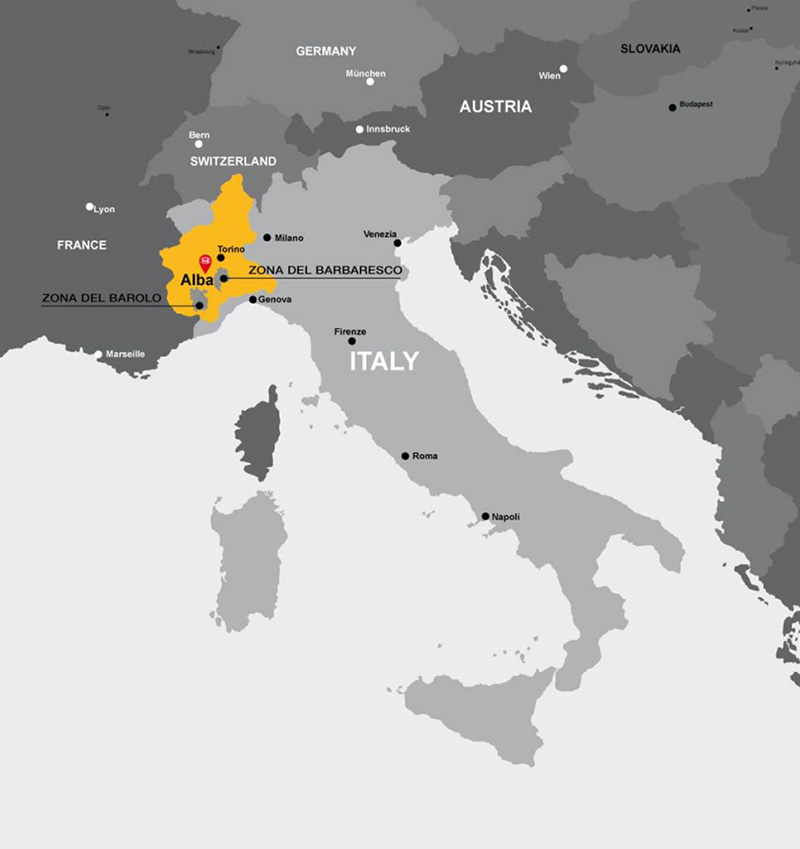 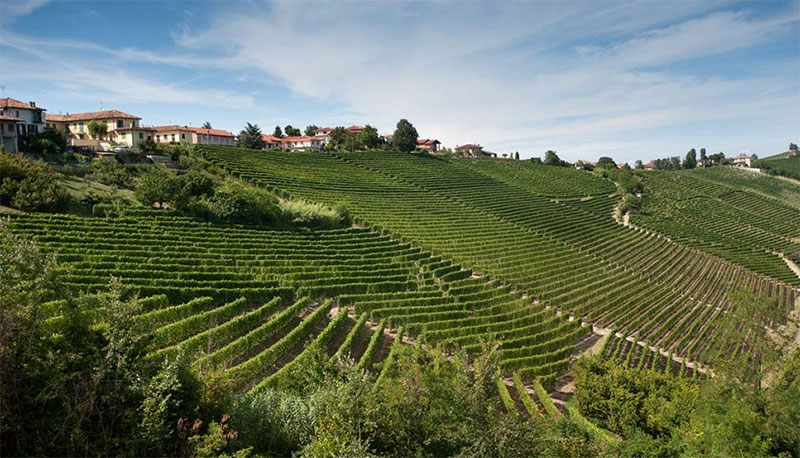 The location of the vineyards was not chosen randomly, but was determined by a strong belief in blending the different characteristics of each vineyard and region in order to produce wines that represent the styles of each appellation’s terroir as a whole, instead of individual sites. This was the method of producing Barolo, Barbaresco, and the other classic wines at the end of the 19th century, and it still remains the winery’s guiding philosophy today. Production is about 33,000 cases a year from these two regions. 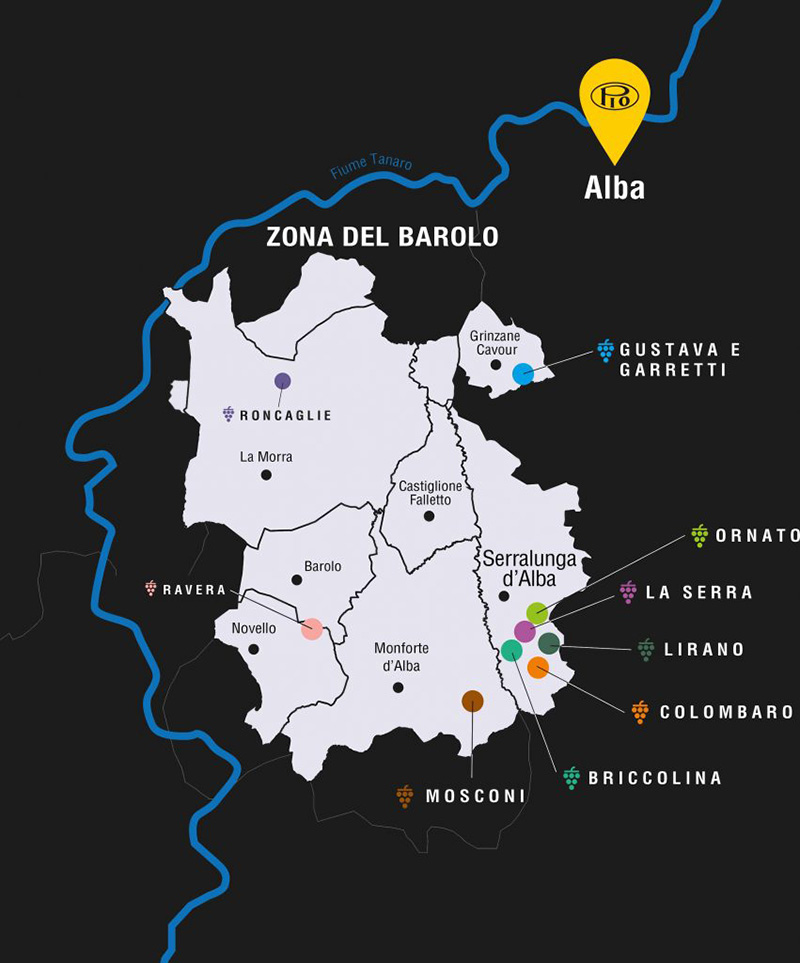 The Barolo region holdings are comprised of 78.5 acres [31.8 hectares].
51 acres [20.7 hectares] are planted with Nebbiolo for Barolo. 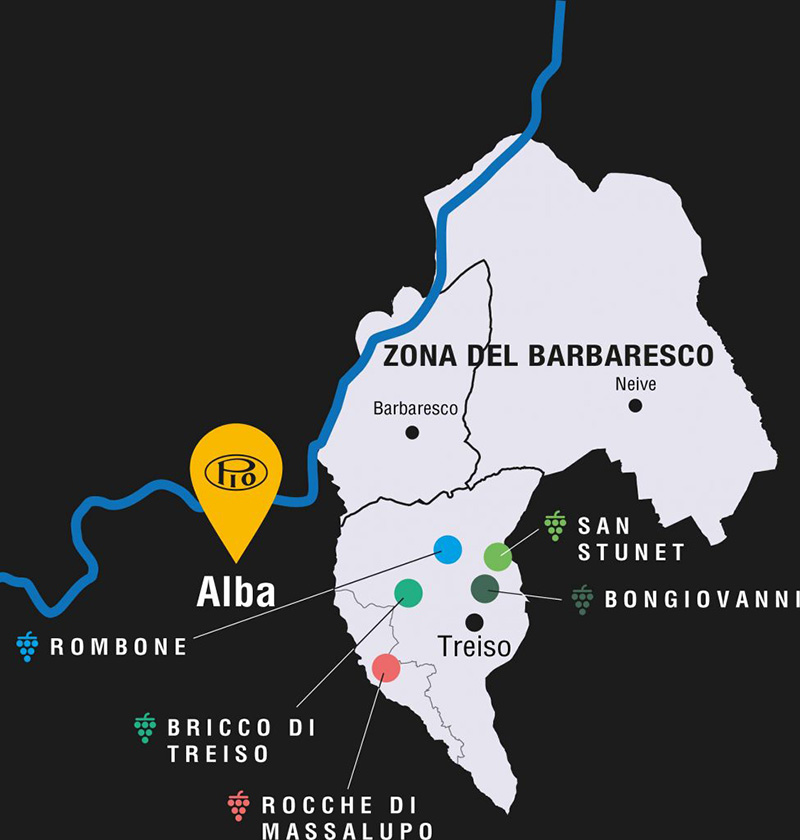 The Barbaresco region holdings are comprised of 66.5 acres [27 hectares].
34.75 acres [14 hectares] are planted with Nebbiolo for Barbaresco. 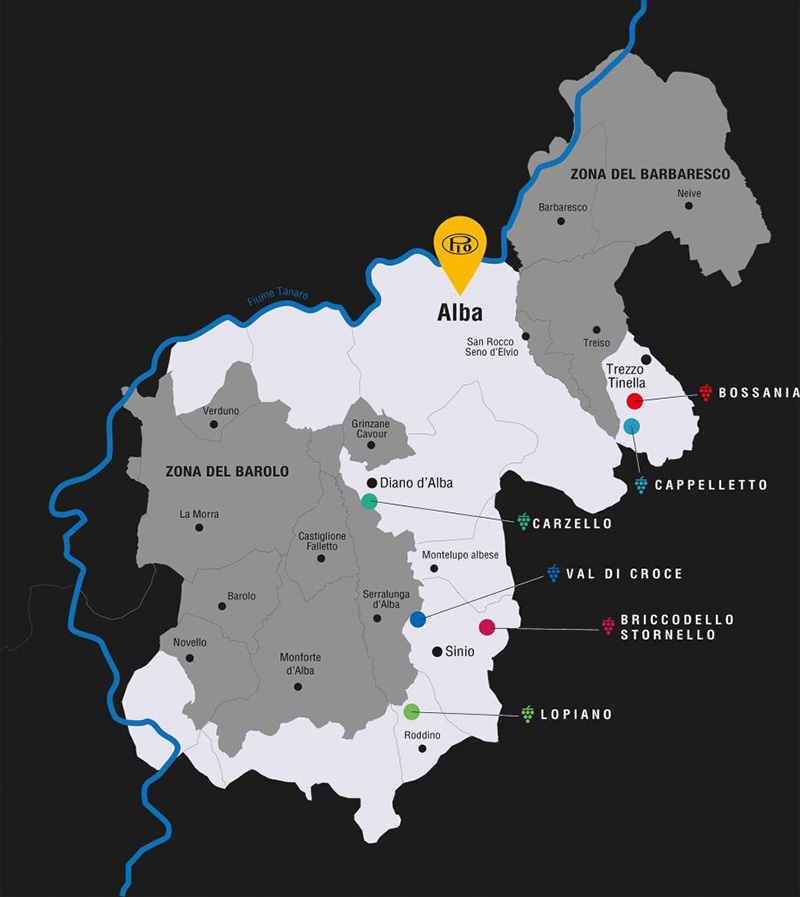 Other vineyards include a total of 25.5 acres [10.25 hectares] in Diano d’Alba, Trezzo Tinella, Roddino, and Sinio.

The farming practices of the winery have become much more modern and sustainable under the current stewardship. “We have moved away from chemicals in the vineyard,” shared Federica. “We consider ourselves almost organic, but my father didn’t want any certification; he didn’t believe in certification as marketing.”

Yields in the vineyards have been restrained to improve quality instead of quantity. No seasonal workers are used in the vineyards, so the same people are immersed throughout the entire growing cycle, from the pruning to the harvest, and interventions are kept to a minimum.

In the cellar, the approach isn’t easily pigeonholed. It’s a sort of fusion between traditional approaches and more modern winemaking. There’s a strong reliance on large-format neutral oak barrels (botti), but most of the top wines also have a portion that goes through small oak barrels for part of their elevage. 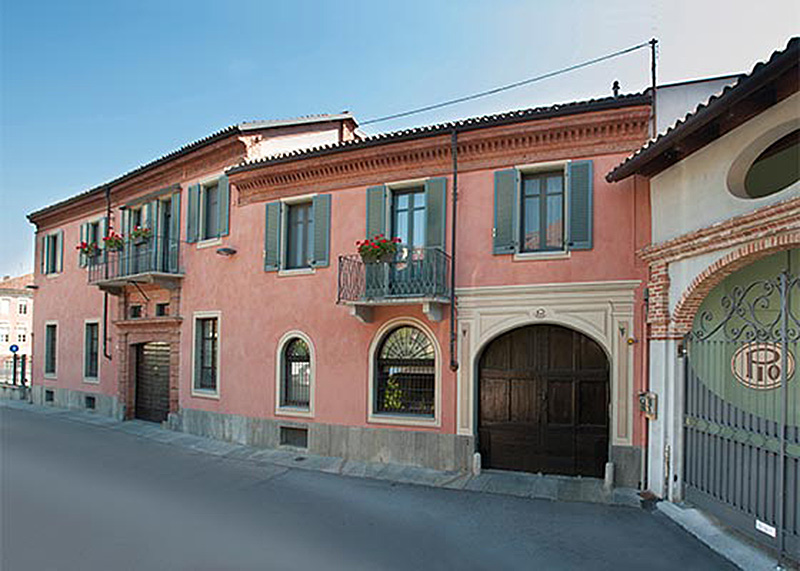 The winery at ground level.

The cellars were built at the end of the 1700s, but the main foundation walls are much older,  dating back to the Roman period, about 50 BCE. There are  four different levels, one of which is even lower than the nearby Tanaro River. They feature naturally-occurring constant temperatures and appropriate humidity. Significant renovations have been made over the years to rebuild and restructure the cellars, including a new fermentation cellar with a gravity racking area and a new barrel-ageing room 36 feet underneath the existing facility. 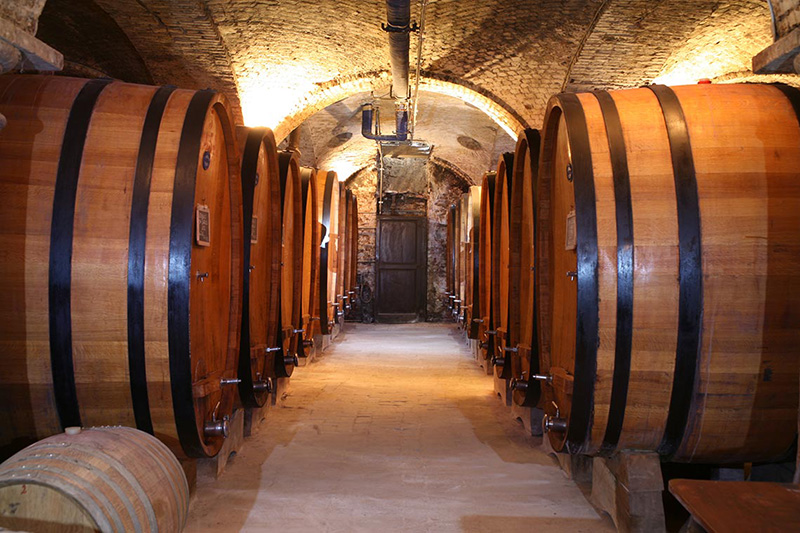 Part of the ancient cellars. 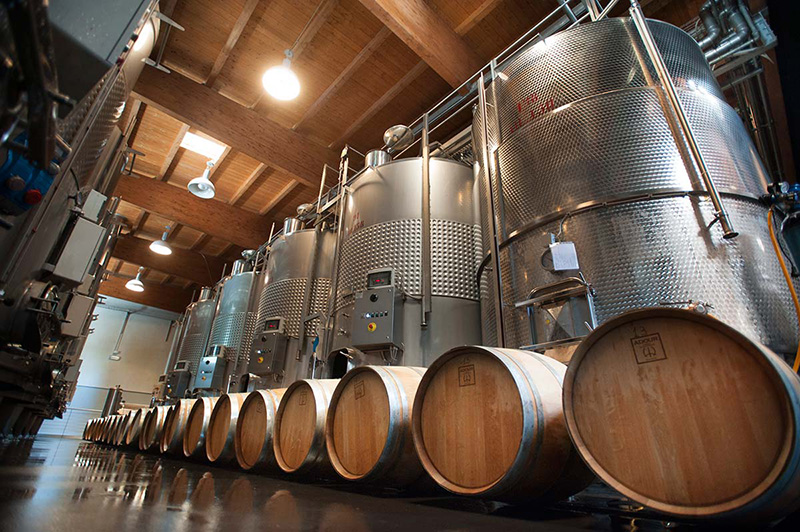 A more modern part of the facility.

This reliable Italian is DOC (Denominazione di Origine Controllata) under the Italian rules of appellation classification.  DOC is the main tier, the third highest of four, and covers almost every traditional Italian wine style. There are around 330 individual DOC titles, each with a set of laws governing its viticultural zone, permitted grape varieties, and wine style.

100% Barbera, this selection was sourced from vineyards in the Barolo region in Serralunga d’Alba (Colombaro) and in Monforte d’Alba (Mosconi); in the Barbaresco region in Treiso (Bongiovanni); and also in the Langhe region in Sinio (Val di Croce, Bricco dello Stornello) and in Diano d’Alba (Carzello).

The wine was fermented in stainless steel tanks, followed by a long maceration on the skins for 20 to 25 days.  It was primarily aged in big French oak “botti” for 12 months, but a small amount was aged in barriques as well.

It presents with a transparent purple.  Next come medium aromas of blueberry and blackberry, which repeat nicely on the palate.  It’s supported by tart-cherry acidity and black-tea tannins, and wraps up in a long finish.  ABV is 14.5%.