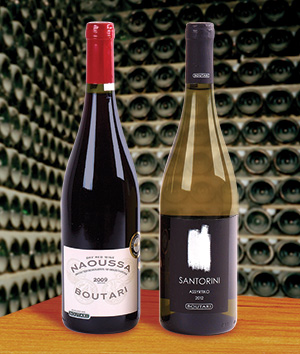 It’s Greek to Me

If you’re a fan of Greek food, and the wines that go with them, you have probably already sampled a few bottles from the ubiquitous house of Boutari, the world’s number-one selling Greek wine.

The Boutari Company was established in 1879 by Yiannis Boutari in Naoussa on 124 acres, making it one of Greece’s oldest purveyors of fine wine. With decades of experience and business acumen, it is one of the top wineries in Greece. Boutari wines are exported to over 45 countries and have won over 370 medals in international wine competitions.

Boutari was the first and only Greek winery to ever win the award “European Winery of the Year” from Wine Enthusiast, after evaluating its performance in winemaking over time.

Although a producer with a long tradition, Boutari isn’t bound by it. They have embraced modern international winemaking techniques, such as the use of stainless steel, cold-temperature fermentation, and French-oak barrel aging. They strive to get the most from both indigenous Greek and French grape varieties.

The extensive Boutari holdings are comprised of six wineries in Greece: Naoussa, Santorini, Peloponissos, Crete, Goumenissa, and Attica, and one winery in Southern France, near the city of Limoux. Each winery has its own distinct personality, influenced by the architecture and the atmosphere of the particular region within which it is located.

The island of Santorini, located in Greece’s Aegean Sea, is a defunct volcanic caldera, and home to some of the oldest vineyards in Greece (at upwards of 300 years).

First comes this wine’s quite pale yellow color in the glass. Next up is a relatively closed nose, with delicate hints of ripe melon. But then things get interesting, with flavors of mango, apple, and grapefruit. There’s a crisp, racy acidity with a suggestion of lemon zest.

This island-born wine practically demands to be paired with seafood, such as Porgies with Avgolemono Sauce, Squid in Wine, or Baked Lobster Tails with Feta, but something like Chicken Breasts in Phylo would be delicious as well.

This wine hails from Bourtari’s original winery in Naoussa, on the southeastern foothills of Mount Vermio in the northern Macedonia region, about thirty miles northwest of the Aegean Sea. The soils are calcium-rich marl (clay loam), and dampened by abundant rainfall.

Made from 100% Xinomavro, the premier red-wine grape of Greece, Naoussa is all about dry, tart, dark cherry, which dominates in the color; on the nose, which also includes the aromas derived from ageing, cinnamon, and wood; and on the palate. Support comes from a nice acidity and soft, medium-grained tannins. To get the most from this bottle, let it breathe for about 30 minutes, and don’t serve it too warm (i.e. not above 65º F).

Enjoy a glass (or two) of Naoussa with a classic Souvlakia, Pork with Green Olives, or Moussaka with Artichokes.