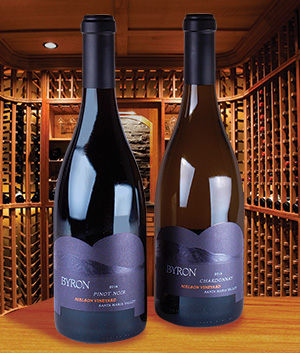 The Poetry of Byron

Fill the goblet again! for I never before
Felt the glow which now gladdens my heart to its core;
Let us drink!—who would not?—since, through life’s varied round,
In the goblet alone no deception is found.
—Lord Byron (1788-1824), English poet

Designated in 1981, the Santa Maria Valley AVA is located in the northernmost part of Santa Barbara County, just east of Santa Maria city. The east–west orientation of the wide, open valley means cool winds and fog flow in freely from the Pacific Ocean, settling most noticeably in lower-lying areas. This cool maritime influence lengthens the growing season (among the longest in the world), and contributes to the eventual sugar/acid balance in Santa Maria Valley’s wines.

The first Santa Barbara County vineyard established in the 20th century was planted in 1964 by Uriel Nielson; it has been Byron Winery’s estate vineyard for over 30 years. 18 miles inland from the Pacific, this historic benchland vineyard serves as a model for Santa Barbara’s viticultural experimentation and sustainable farming methods (It is California Sustainable Winegrowing Certified).

Nielson was largely replanted in 1991, and it has since been enhanced with considerable investment. A new 4,000-barrel-capacity winery has been built, and in 2014, Byron returned to its focus on single-vineyard Chardonnay and Pinot Noir, presenting this unusual opportunity to review two very different wines from the same vineyard.

This light-golden-hued wine hails from the original “Wente” clone, which at Byron was planted in 1964 and again in 1999. The harvest was fermented in barrel with full malolactic fermentation, and then aged in the same barrels (French oak, 54% new) for 15 months. The resulting wine features aromas of butter and mango. The palate is full-bodied and has a rich mouthfeel, with hints of apricot, lemon, grapefruit, and minerals.

Three Pinot clones were used for this wine. They came from the east end of the property, which is very sandy with outcroppings of shale and limestone. The fruit was aged in 35% new French oak.

This expression of the ever-obstinate pinot noir is rich ruby-hued in the glass, with mouth-watering aromas of dark fruits, brown spice, smoke, and dried thyme Those scents carry on to the the flavor, especially wild blackberry. The whole shebang is supported by good acidity and astringent tannins.