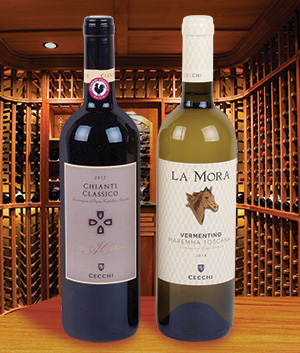 Wine is Sunlight, Held Together by Water

In 1893, Luigi Cecchi became a professional wine taster. Although widespread in other parts of Europe, the craft of “palatista (taster)” was still unknown in Italy. However, Cecchi believed that by approaching Italian wines with professionalism and organization, people in Italy as well as elsewhere would be able to recognize the quality of the wines produced.

In the early 1900s, Luigi’s son Cesare joined him in business, founding the “Cecchi” label, hoping to prosper both at home and abroad. Luigi, the founder’s grandson, was the key figure during the time of third-generation innovation and expansion. With him, the Cecchi brand distinguished itself in the domestic wine industry thanks to new technologies, a search for new territories, and an intuition for business.

Today fourth-generation Andrea and Cesare Cecchi lead the company with undiminished enthusiasm. These two brothers have focused their attention on productive sustainability and on the ability of the wine produced to express its territory of origin.

In Tuscany’s Maremma Toscana DOC, on the upper third of Italy’s western coast, virgin forests that border with ancient churches and enchanting villages are the prevalent backdrops to slopes on which the grapevines grow. It is a unique environment where the Cecchi family works with the natural cycles of the seasons. Respecting the ecosystem has accompanied the growth of the winery, and today a minimal environmental impact is an ongoing goal.

At Cecchi, “sustainability” takes on a real and proactive character driven by three well-defined policies: the defense and improvement of winery lands, agriculture, and environment; recycling; and using new technology that allows for the minimization of energy consumption and natural resources necessary for production. Water was one of the first natural resources the winery was concerned about. This explains the longtime presence of an innovative system of constructed wetlands for the treatment of wastewater from the winery centers in Chianti and of the Maremma, providing natural water flows and a safeguard for the environment.

Mora means “horse” in Italian, a tribute to the cattle-herding cowboys that historically lived in the Maremma region. This lemon-hued wine offers a nose of flowers and sweet citrus. This sense continues on the palate, adding just a hint of white peach. La Mora is light and approachable, with a short finish.

This wine will go nicely with Baked Oysters with Oil and Parsley, Fricasseed Chicken with Egg and Lemon, or Sauteed Snapper with Mushrooms.

This Sangiovese is dark garnet in the glass. It opens with a solid cherry nose and a hint of earth and spice. The flavor profile features tart plum, cocoa, and cinnamon, supported by smooth tannins and ending in a medium-long finish.

Enjoy this Italian with Fava Beans with Artichokes and Peas, Rabbit with Rosemany and White Wine, or Tuscan Meat Roll with White Wine and Porcini Mushrooms.