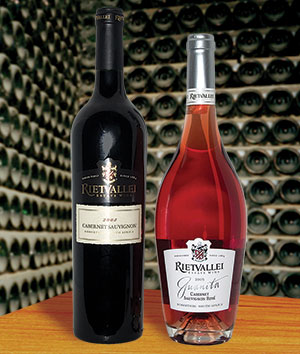 Rosés Are Red, My Love…

…Cabernets are too. These two cabs come from the Rietvallei Wine Estate, located in the Robertson region of South Africa, outside of Johannesburg. This warm, low-rainfall area has excellent lime-rich soils, and is usually known for white wine, sherry, and brandy.

The Rietvallei Estate was founded in 1864 by the Burger family, and for many decades only produced red muscadel (also known as muscat), a sweet dessert wine. The estate’s house style was based on a recipe still to be found nailed behind the cellar door.

Today overseen by sixth generation winemaker Kobus Burger, Rietvallei began to expand its offerings a few years ago. A Chardonnay was first released in 1987, followed by a Sauvignon Blanc in 2001. The selections now include a number of other whites and reds as well.

This easy-drinking cabernet will appeal most to those who like a lighter style of wine. Although the wine is very dark, the flavor is soft, more like a merlot than a cab. There is also a hint of sweetness as well as tartness. The aroma in the glass, or “nose,” is quite delicate. The finish is short, reflecting the low level of tannins. Enjoy this with a wide range of not too assertive foods, including fish and ‘burgers.

A fruity but quite dry rosé made from 100% cabernet sauvignon. A nice tart refreshing taste. Should pair well with any food where sauvignon blanc would be the more usual choice.