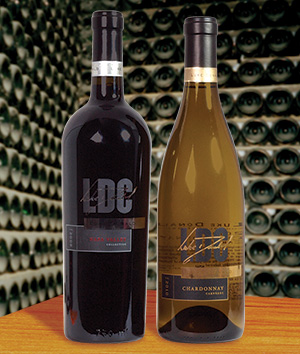 No, this month’s wines aren’t associated with Donald Trump (a teetotaler, by the way), but rather, English professional golfer Luke Donald. The Luke Donald Wine Collection is the result of a collaboration between Donald and Bill Terlato, head of the behemoth wine distribution operation, Terlato Wines International.

Terlato first met Donald when the golfer was a student at Northwestern University. Terlato took lessons from Donald’s coach, Pat Goss, who initially suggested the two get together. Along with an interest in golf, the two men shared an interest in sports cars and ultimately, wine.

Golfer-endorsed wines are a growing trend, and already include such players as Ernie Els, Nick Faldo, David Frost, Cristie Kerr, Jack Nicklaus, Greg Norman, and Arnold Palmer. In 2006, Terlato approached Donald with the idea of creating a pair of wines for him under the Luke Donald label. He was adamant, however, that he didn’t want merely a celebrity endorser. Terlato wanted someone who would be involved in the development of the product. The wines that resulted from this partnership are serious wines, rather than a vanity effort (and are priced accordingly).

This 100% Chardonnay is sourced from vineyards in the Carnaros AVA, which lies at the northern end of San Pablo Bay (the northern section of San Francisco Bay).

The wine is pale yellow in the glass. On entry, it offers a full mouthfeel. That buttery sensation continues to develop on the palate, followed by just the right amount of acidity.

For this wine’s flavor profile, Donald looked to the white Burgundies of France. The flavor is predominantly of tart citrus fruits; the wood (25% new French oak, 75% used French oak) is there, but is nicely balanced.

Enjoy this wine with Summer Vegetable Stir-fry with Couscous, Braised Greek Chicken and Artichokes, or Almond-crusted Sole with Leek-and-lemon Cream.

Befitting Donald’s background, this red wine blend is a Claret. Although “claret” has no legal definition, it is generally a term used by the English when referring to certain red wines of Bordeaux with a light, refreshing style.

This Claret would go well with Chicken Simmered with Cream and Onions, Roast Duck with Cherries, or Braised Ham with Mushroom Stuffing.

These wines are limited production, each limited to less than 1000 cases, but are well worth seeking out.