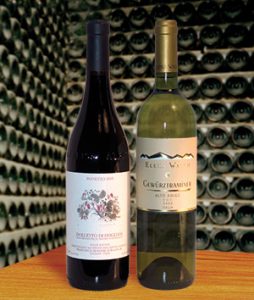 When the Moon Hits Your Eye Like a Big Pizza Pie, That’s Amore.

So sang famous Italian-American crooner Dean Martin. “When the world seems to shine / Like you’ve had too much wine / That’s amore.” In this post  we’re going to have just enough of two somewhat unusual wines from Italy.

Geewurzawhat? Gewurztraminer [guh-VURTZ-trah-mean-er] is a white wine most commonly associated with Germany. The name is derived from gewürz (spice) + traminer, (variety of grape), from tramin (Termeno, Italy), where this white-wine grape is thought to have originated over 1000 years ago, although not widely planted there now. This is a wine that’s best drunk fairly young—even vintage Gewürztraminers rarely age well past five years.

Elena Walch is a former architect who became a wine producer in 1985 after marrying into one of the oldest established wine families in Alto Adige. Her two estates, totaling 67 acres, lie on the southern slopes of the Alps, where during the summer the central valleys become filled with warm, Mediterranean air. Under her care, the vineyards have been transformed with low-yielding but high quality-clones of both international and local grape varieties.

Her Gewürztraminer is just a tad more than slightly sweet, with a dry finish on the back of the tongue that has a hint of bitterness. The color is an attractive golden yellow. The nose is characteristically aromatic and flowery.
Serve lightly chilled as a full-flavoured aperitif and with a range of dishes, including savory first courses and grilled fish.

Traveling 290 miles southwest from Alto Adige across the top of Italy’s “boot” will bring you to Dogliani, where Dolcetto [dole-CHET-oh] may have originated and was harvested as early as 1593.

The Francesco Boschis estate started making and bottling wine in 1968, while previously grapes were sold to other producers in the area. Dolcetto is the main varietal planted, commanding a dominant 80% of the winery’s production. (Unfortunately, an extensive Internet search yielded no more information on this shy estate.)

This Dolcetto is what Boschis terms an ‘autumn wine,’ but I think it is more suitable to late spring or early summer. Although the color is inky dark, the body is remarkably light (rather too much so for my taste in reds) and refreshing with black cherry overtones. One taster detected a touch of brettanomyces, which is a yeast that grows on grapes and in wine. Some say this gives the wine’s fruit flavors a degree of gaminess; others say a degree of wet cardboard. Neither sounds appealing to me, but happily I didn’t taste the ‘bret.’

This wine will pair nicely with all things Italiano: a nice antipasto platter, pasta, grilled fish, and of course, pizza.

If you need a pizza recipe, here’s one of my originals you might want to try:

About an hour before service, turn the oven up as high as it will go.
Twenty to thirty minutes before service, roll dough out to 16” circle. [Or divide dough if you want to make two smaller pizzas.] Place on pizza screen if available, being careful not to press the dough into the mesh.

Add 2 tbs olive oil to large skillet. Over medium heat, saute onion, garlic, and pepper until softened, about 5 minutes. Transfer to a bowl, leaving as much oil in pan as possible. Add sausage and saute until browned, breaking up into coarse chunks.
Brush dough with olive oil. Cover evenly with all ingredients except mushrooms. Ladle on enough sauce to generously cover. Distribute
mushrooms on top of sauce.
Bake in oven until crust nicely browns, about 10
minutes.

The dough for this recipe was derived from James McNair’s excellent New Pizza.  Don’t be discouraged by the one-star reviews, they are bogus, imho.  One dweeb complained that McNair didn’t cover such arcane techniques as cold fermentation.  Geez.  If you want a cold ferment, use room temperature water and let the dough rise in the refrigerator for 24 hours.  But, you’re not going to have pizza tonight, and you won’t taste the subtleties a cold ferment brings to dough under all those toppings.