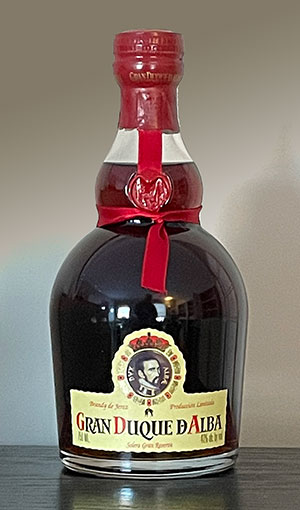 For those who don’t know, brandy is distilled from wine and aged in wood to give it its characteristic flavor and color.  The word brandy comes from the Dutch brandewijin, meaning  “burned (distilled) wine.”  It is usually made from grape wine, but can be distilled from other fruit wines, most often apple, in which case it is called apple brandy or applejack generically, and Calvados in France.  (Calvados is in northwestern France, on the English Channel.)  Cognac, perhaps the best-known type of brandy, specifically comes from the town of Cognac and the delimited surrounding areas in western France.  So, all Cognacs are brandy, but not all brandies are Cognac.  For more detail on Cognac, click here. 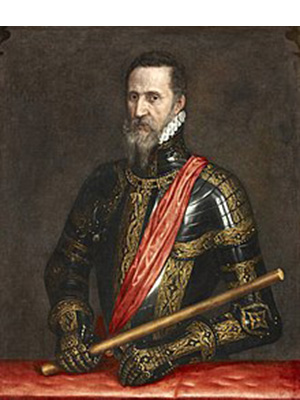 Of course, wherever you find wine you will likely also find brandy, and Spain is no exception.  This brandy was first introduced in 1945 by a wine merchant in Madrid at that time. He was a good friend of the Seventh Duke of Alba, Jacobo Fitz-James Stuart y Falcó,  and asked the duke if he could endorse the new brandy he was about to offer for sale by applying the duke’s name to it. After tasting it the aristocrat was pleasantly impressed and suggested that for such a noble product it would be far more appropriate to use the name of his ancestor the Great Duke of Alba, Fernando Álvarez de Toledo y Pimentel, who was a Spanish noble, general, and diplomat, shown here. He was an adviser to two Spanish kings, governor of the Duchy of Milan, viceroy of the Kingdom of Naples, governor of the Netherlands, and viceroy and constable of the Kingdom of Portugal. END_OF_DOCUMENT_TOKEN_TO_BE_REPLACED