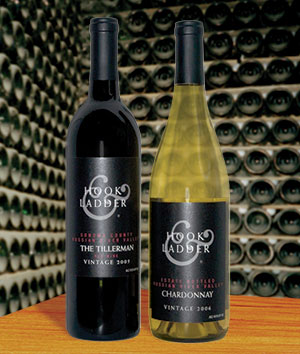 Looking toward his eventual retirement, in 1970 San Francisco firefighter Cecil De Loach bought 24 acres of old-vine Zinfandel in the Russian River Valley of Sonoma County. For six years De Loach worked the acreage part time, selling grapes to other producers, as neophyte winemakers often do. In 1976 De Loach released his first wine, 1,000 cases of a vintage 1975 Zinfandel, and in so doing became one of the first Russian River wineries.

After a 16-year career, De Loach retired from the San Francisco Fire Department in 1982. But this allowed him to work the winery full time, and over the next two decades he grew production to 250,000 cases annually. Not only was he one of Sonoma county’s wine pioneers, during this time he was also extremely active as a promoter and advocate of Sonoma wines.

Unhappily, De Loach ran into financial difficulties in the late 1990s, and filed for bankruptcy in 2003. (The De Loach label continues, however, having been purchased by the Boisset family of Burgundy, France.)

He could have called it quits at that point, but De Loach postponed his retirement yet again. In 2004 he founded Hook & Ladder Winery, the name an obvious nod to his first career as a firefighter, having been a tillerman steering the rear wheels of a hook and ladder fire truck. (He was forced to leave his eponymous label behind because a non-compete agreement prevents his own name from ever again appearing on a wine bottle, a testament to his stature in the Sonoma wine industry.)

Still in the Russian River Valley today, De Loach now works 375 acres in the cool climate there, with his wife, son, grandson, and granddaughter all employed at Hook & Ladder.

A single-vineyard blend of 46% Cabernet Sauvignon, 19% Cabernet Franc, 18% Merlot, and 17% Sangiovese. Plenty of ripe fruits, with a supporting cast of cassis, spice, cedar, and leather. A somewhat short finish. After decanting for an hour, serve with pork satay and peanut dipping sauce, or prime rib paired with madeira sauce.

This wine is a very light yellow-green, pale almost to the point of being colorless. Fermented in a combination of stainless steel and seasoned French oak barrels to retain its crisp acidity. The tart citrus flavors are balanced with just a hint of oak from the not-new barrels. (Oaky, buttery chardonnays are on the wane, I for one am sorry to report.) This chard features bright but delicate aromas of just-ripe apple, pear, and mango. Good now, but should be more appealing in warmer weather. Would contrast nicely with richer seafood such as truffled lobster risotto or rosemary-roasted salmon.