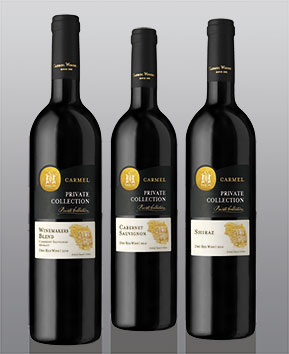 The first mention of wine in the Bible appears in Genesis, chapter 9, verse 20, “And Noah began to be an husbandman, and he planted a vineyard.” The story goes on to recount some unpleasantness after Noah overimbibes, but there is no reason to go into that here. The point is, wine is as old as history itself, with some of its earliest beginnings in the Middle East. Indeed, references to wine appear hundreds of times in Scripture, through both the Old and New Testaments.

Wine production flourished in the eastern Mediterranean until the rise of Islamic prohibitionists suppressed it in the 8th century. However, there has been a modern renaissance in Turkey, Cyprus, and Lebanon, as well as Israel, from which these Carmel Winery Private Collection wines come.

Sweet red kiddush wines, consumed on the Shabbat (the Jewish day of rest) and other Jewish holidays, were for years the standard output of the original cooperative wineries of Carmel at Rishon le Zion and Zichron Yaacov in the coastal regions of Samaria and Samson, a gift to Israel from French wine magnate Baron Edmond de Rothschild, owner of the famous Chateau Lafite in Bordeaux. They still control just under half of all grapes in the most traditional wine-growing areas.

Starting in the 1980s with the introduction of technology and expertise from California, Israeli wines began to move from primarily sacramental use to products intended to compete on the international stage.

Carmel Winery, one of the first and largest winemakers in Israel, was founded in 1882 by the aforementioned Baron Rothschild. It sits on the eastern shore of the Mediterranean, about 14 miles south of Haifa. The Zichron Yaakov wine cellars were built in 1890, and are still active to this day. Carmel Winery works with 108 families of wine growers to nurture some 3,500 acres of vineyards in Israel from the Galilee and the Golan Heights in the North, to the Negev in the South. Carmel uses state-of-the-art technology to produce an array of wines from entry-level offerings to premium bottlings.

The 2018 Winemakers Blend is an easy-drinking mix of 50% Cabernet and 50% Merlot, made by Carmel’s Chief Winemaker Yiftach Peretz. It has fragrant aromas of blueberry and vanilla on the nose. The taste features suggestions of plums with hints of spices and cocoa abetted by soft tannins. The finish is relatively short.

The 2018 Cabernet Sauvignon, perhaps predictably, is much like the Winemakers Blend. It has rich aromas of blackberry and chocolate, with a similar flavor profile. The well-balanced tannins are more prominent, and the finish rather longer.

The 2018 Shiraz is deep purple in the glass, with a medium-bodied palate of dark stone fruit, a hint of green pepper, and good supporting tannins. It offers the longest finish of this trio.

All three of these Carmel Winery expressions are worthy of your consideration, but the Shiraz was the standout for me.

These wines are “kosher for Passover” and “mevushal.” Both certifications require handling and processes unique to these types of wine.

Kosher wine is grape wine produced according to Jewish dietary law (kashrut). To be considered kosher, Sabbath-observant Jews must supervise and sometimes handle the entire winemaking process, from the time the grapes are crushed until the wine is bottled. Any ingredients used, including finings, must be kosher as well. Wine that is described as “kosher for Passover” must have been kept free from contact with chametz, such as grain, bread, and dough.

Mevushal is a subclass of kosher wine that can be handled by non-Jewish or non-observant waiters, and is consequently frequently used in kosher restaurants and by kosher caterers. To be classified as mevushal, kosher wine is cooked or boiled, after which it will keep the status of kosher wine even if subsequently touched by a non-Jew.

The process of fully boiling a wine can greatly alter the tannins and flavors. Therefore, much care is taken to satisfy the legal requirements while exposing the wine to as little heat as necessary.  Surprisingly, there is significant disagreement as to the precise temperature a wine must reach to be considered mevushal, ranging from 165°F (74°C) to 194°F (90°C). Heating at the minimum required temperature reduces some of the damage done to the wine, but still has a substantial effect on quality and aging potential.

Alternatively, flash pasteurization rapidly heats the wine to the desired temperature and immediately chills it back to room temperature. This process is said to have much less impact on flavor, at least compared to actual cooking or boiling.  I assume Carmel Winery uses the flash pasteurization method to achieve mevushal status, as none of these wines display any obvious damage from overheating.

Regardless of the heating method, to ensure the kosher status of the wine it must be overseen by a Jewish authority who supervises the kashrut status of the producer. Generally, this supervisor will physically tip the fruit into the crush and operate the equipment. Once the wine emerges from the process, it can be handled in the normal fashion.