For over three decades now, South America, particularly Chile and Argentina, has enjoyed a growing reputation for high-quality wines at very reasonable prices.

Chile has a long history of wine production, starting in the north of of the country as early as the 16th century under Spanish colonial rule. The wines gained quick acceptance, and they were soon being exported to Peru, Spain’s other colony, challenging imported wines from Spain itself.

E A R L Y  H I S T O R Y
The Echenique family, originally from the Basque region on the Spanish-French border, planted vineyards in the Peralillo area of the Colchagua province around 1750. In the 19th century, the family was part of the rapid expansion that took place in Chilean winemaking at the initiative of a handful of pioneers who were inspired by the French model. The first French grapes were planted in the Cañeten Valley of Colchagua in 1850. Vineyards went from 22,240 acres [9,000 hectares] in 1870 to 98,8442 acres [40,000 hectares] in 1900, largely driven by the phylloxera that ravaged Europe’s vineyards during that period and sharply reduced wine production there. (Happily, and rather surprisingly, Chile has avoided phylloxera for as long as vines have grown there.)

In the late 1980s, the legendary French producer Domaines Barons de Rothschild (Lafite) started looking for a property in Chile, and conducted extensive research into the wine industry there. Eventually, the Los Vascos estate, which  translates as The Basques, in honor of the Basque origins of the original farmers, was selected because of its location near the ocean, and the quality of the soil. The property was purchased in 1988. Along with excellent  weather conditions, Los Vascos benefits from intense exposure to the sun, adequate water sources, semi-arid soils, and little risk of frost. At the time, the property amounted to some 5,436 acres [2,200 hectares], of which 543 acres [220 hectares] were planted with vines.

After the acquisition, DBdR began to deploy their vast resources, both financial and technical. The existing vineyard was restructured, a program for new planting was implemented, and yields were intentionally reduced to drive up quality. Water resources were secured with a drilling program, and a weather station was built in the vineyard. The winery was enlarged and modernized in several stages in order to meet the new owner’s production requirements, with the addition of a stainless steel vat room, pneumatic presses, and a barrel room.  Over the next twenty years, work was done in both the winery and the vineyard to increase the quality of the product as much as possible. By the late 2000s, the vines planted in the 1990s had reached full maturity. Large-scale drip irrigation was adopted, and  a variety of new grape varieties were added. 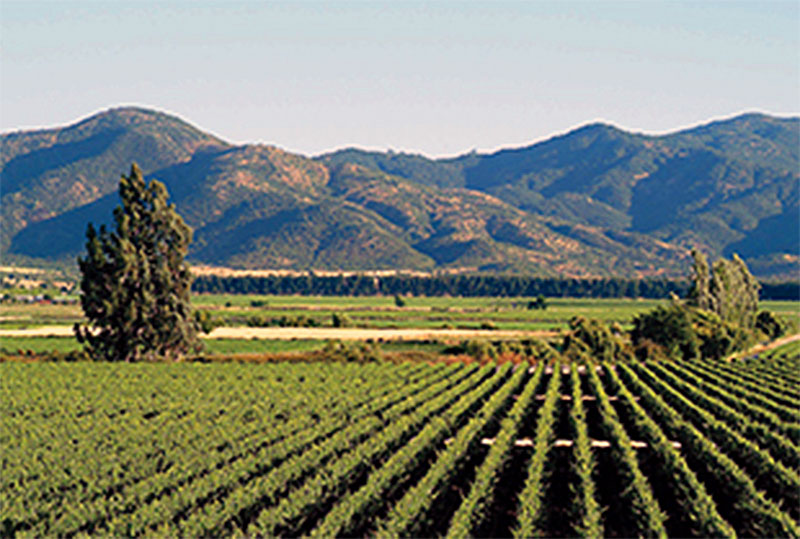 Having by now been expanded to 1,580 acres [640 hectares], the vineyard is one of the largest vineyards in the central Colchagua valley, at the foot of Mount Cañeten. The volcanic soil consists of sandy-clay soil and granitic sand. The vineyard is planted with Cabernet Sauvignon (85%), Carmenère (5%), Syrah (4%), Malbec (1%) and Chardonnay (5%). The oldest vines are 70 years old. The vineyard is worked with traditional growing techniques, drip irrigation, and green harvesting. Maximiliano Correa is the chief winemaker, a position he has held for nearly 18 years.

This selection is 100% Cabernet Sauvignon, and is estate grown and bottled. Perhaps predictably, this wine straddles the characteristics of New World wines and Old World wines, given that it is grown in Chile and produced by French winemakers.  (For more on New World vs Old World, see my post here, or my podcast episode here.)  It is a moody, dark purple in the glass.  It has a nose of rich dark fruits, particularly black cherry and plum,  backed up by some leather and earth.  The palate features those same, rather restrained, dark fruits and a bit of cocoa, in balance with good soft tannins.  It has a relatively light acidity. Be sure to decant for about an hour before serving.  The ABV is 14% and the average annual production is a mere 250,000 to 300,000 cases.