Sauternes is the famous French appellation that is home to some of the greatest sweet wines in the world, and to which it is largely dedicated.  It lies within the Graves district of the Bordeaux region.

The wine of the same name is made primarily of Sémillon, but smaller amounts of Sauvignon Blanc and Muscadelle are often included.  The unique characteristic of Sauternes is that in years with just the right conditions, including cool, foggy mornings and dry, sunny afternoons, the grapes are plagued with Botrytis Cinerea, or Noble Rot.  This beneficial mold causes the grapes to shrivel, driving out water and leaving the fruit rich and loaded with sugar.   Winemakers must have a clear understanding of this phenomenon, as only the grapes that have been perfectly concentrated by the Botrytis will be picked, one by one.  It is very much a risky, hit-or-miss proposition, subject to many variables of weather and harvest.  Because of this, Sauternes’ are not made every year and are expensive.

This house originated as La Maison Noble du Bayle, but was purchased by the Bordeaux négociant Pierre Guiraud in 1766. They intentionally built up an atmosphere of mystery around the operation.  The domain remained in the Guiraud family until 1837, and, during this time they constructed the Protestant chapel that still stands today on the grounds of the estate.  The property was awarded the Premiers Cru [First Growth] Classé in 1855 in the classification system established by Emperor Napoleon III. 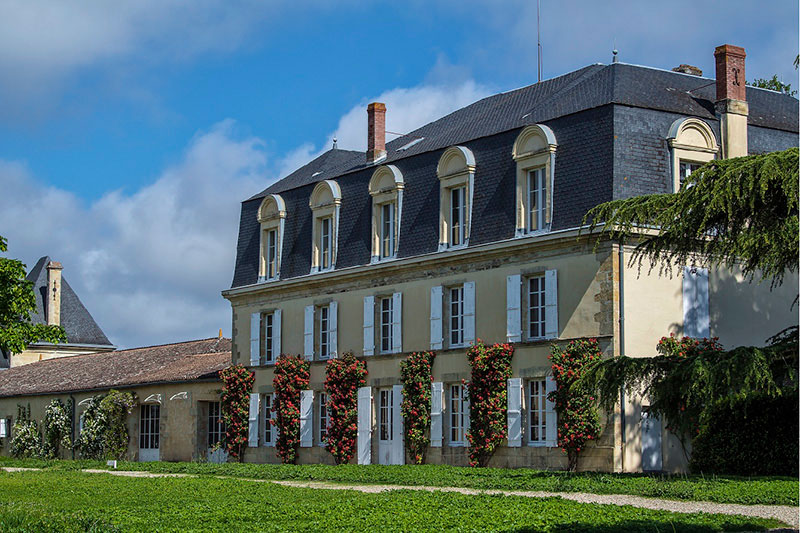 Over the years Guiraud has changed hands several times.  It was sold to the Bernard family in 1837; they eventually sold to the Maxell family; and the next owner was Paul César Rival.  In 1981, the estate was sold to the Narby family,  Canadians of Egyptian origin, and Xavier Planty was retained as manager in 1988.  The Narbys and Planty restored the business to its previous esteem  after standards slipped in the 1970s.  It changed hands again in 2006 when it was purchased by a four-man partnership of Planty, Robert Peugeot, Olivier Bernard, and Stephan von Neipperg. The partners removed the red wine grape varietals that had been planed in the 1930s, and modernized the cellars and winemaking equipment. A new drainage system was installed, and extensive replanting was conducted also.

The co-owners of Guiraud have other interests as well.  Planty is president of the Organisation for the Defence and Management of the Sauternes and Barsac appellations, and he represents the territory and its wines at the CIVB, the interprofessional council for Bordeaux wines. Peugeot is president and general manager of the company FFP. He is an influential gourmet and is also a member of the prestigious Club des 100 in Paris. Bernard is president of the Union des Grands Crus and is also manager of Domaine de Chevalier, the well-known first-classified growth in the Graves appellation. Von Neipperg runs, among others, Château Canon La Gaffelière and Château La Mondotte, both Premier Grand Cru Classé in Saint-Emilion.

In 2001, Guiraud established a conservatory of white-wine grape varieties, the only one of its kind in the world. This reserve contains 135 original strains of Sémillion and of Sauvignon Blanc. The mission is to maintain the diversity of the vines and ensure the sustainability of the vineyard.

Guiraud registered the term BioViticulture in 2010, a name reflecting their focus on organic farming and sustainable viticulture (they began farming organically in 1996).  The following year, the estate earned the status of full Agenace Bio (AB) organic certification.  Nature and a respect for biodiversity were driving factors (planting hedgerows, wild grass in between the vine rows, bird houses, and ‘insect hotels’) even before that. The whole running of the domain is ecologically minded, from the choice of energy and water supplies to the recovery of carbon dioxide during vinifcation.

“A study undertaken in the summer of 2010 revealed 635 species of insects and spiders in our vineyards. This illustrates the harmony that reigns in a well-balanced environment. The vine thus concentrates on the quality of its fruit.”
–Luc Planty, technical director de Château Guiraud 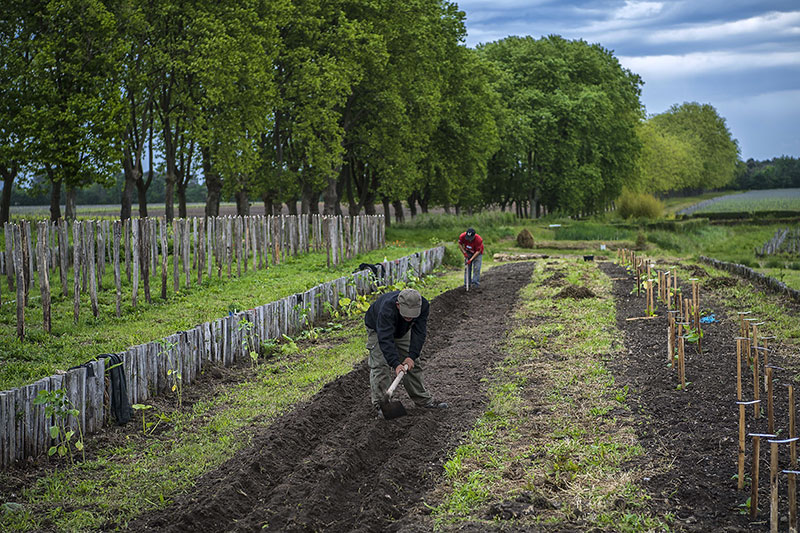 The Château Guiraud estate vineyard is 210 acres [85 hectares] planted to 65% Semillon and 35% Sauvignon Blanc. These two varietals are vinified separately before blending. The soil is a mix of sand, gravel, clay, and limestone on sloping hillsides which rise to 240 feet [73 meters] at their peak. At the bottom of the slopes the presence of natural springs ensures perfect drainage of the vineyard.  The vines average age is 25 to 30 years.

Any discussion of Sauternes is incomplete without mentioning the legendary Château d’Yquem, the most famous Saurternes of them all, and the only one granted the highest Premier Grand Cru Classé.  It is one of the longest-lasting (and expensive) wines in the world.   For example, “The 1811 Château d’Yquem is prized as one of the greatest wines in the history of Bordeaux, and one of the most supreme vintages ever produced. It was rated the ultimate ‘100 points’ by critic Robert Parker, and again 100 points by The Wine Spectator‘s Per-Henric Mansson in 1999.”  Although I tend to avoid pricing here on Winervana, as a point of reference the 2015 Guiraud Sauternes in a 375 mL half bottle sells for about $30.   The d’Yquem averages 10 times that at $300 for a half bottle.

A blend of 65% Sémillon and 35% Sauvignon Blanc, this 2015 is the fifth vintage to be certified as organic.  Vinification occurred in new French oak barrels.  The wine was aged for approximately 21 months in 90% new oak and 10% used.

This rich elixer is very deep gold in the glass.  The nose features dried apricots and citrus.  The apricots continue on the palate, backed up by pineapple, honey, an unctious mouthfeel, and nicely balanced acidity. Spendy but worth it.  Case production was about 5,800, and ABV is 13.5%

Note: Chaptalization, or sugaring, is the procedure of adding sugar to grape juice or must prior to or during fermentation.  This is done when natural grape sugars aren’t high enough to produce reasonable alcohol levels.  The process is legal in France and Germany, but not in California and Italy.  Planty is committed to using the least possible amount of chaptalization in his winemaking.