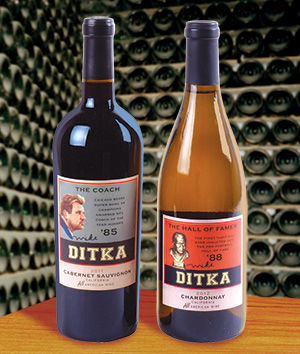 Sports fan or not, you perhaps  have heard of Mike Ditka, immortalized as Da Coach in the “Bill Swerski’s Chicago Superfans” sketches that were a staple of the 1991 – ‘92 season of Saturday Night Live. After a career as a Hall-of-Fame NFL player, and a Super Bowl Champion coach, Ditka went on to become a restaurateur (four locations), ESPN commentator, cigar purveyor, and celebrity spokesman.

As part of his restaurant venture, Ditka also became interested in wines, and launched his eponymous private label in 2006, when he partnered with Mendocino Wine Company to do the actual winemaking.

However, in part because of limited distribution, sales were disappointing, falling more than 28 percent by the summer of 2012. At that time, Da Coach decided that a relaunch was necessary, and teamed up with Chicago-based world-wide wine powerhouse Terlato Wines International.

Although Ditka is the public face of the line, and continues to weigh in on the final result, the production chores are now handled by 2Sons Winery. 2Sons is a wine making team that works out of the Rutherford Hill winery in Napa Valley, another Terlato holding.

With the Terlato muscle behind Ditka’s wine, the line has been completely rebranded, distribution has been substantially increased outside of the Chicago area, and output has risen from 5,000 to 16,000 cases, comprised of eight labels.

The Hall of Famer Chardonnay 2012

This wine greets you with a lemony color and aroma. The taste features grapefruit (plenty of zippy acidity), with supporting hints of apple and honeysuckle. Some of the wine spent six months in barrel during fermentation, while another portion was in stainless steel; the ratio was designed to keep the evidence of wood in the background. It ends with a rather one-dimensional short finish.

Ice down a bottle of The Hall of Famer and pair it up with Artichoke and Lemon Fritters, Warm Pancetta-Wrapped Endive Salad, or Asian Chicken in Ginger-Lemongrass Broth.

Come on! Shouldn’t this really be named Da Coach? The wine world could always benefit from a bit more humor and a bit less stuffiness. Regardless, this easy-drinking cab is very approachable. It is transparent garnet in color, somewhat lighter in appearance and body than most cabernets, perhaps because it is “only” 78% cabernet sauvignon, abetted by 15% merlot and 7% cabernet franc.

The nose sports aromas of raspberry and a bit of red currant. The raspberry continues on the palate, supported by an undertone of dark chocolate from the abundant but not overwhelming tannins.

Enjoy this wine with Rack of Spring Lamb with Roasted Garlic, Pork Chops with Morels and Thyme (you do hunt for your own morel mushrooms, don’t you?), or Veal Stir-fry with Snow Peas and Snow Pea Shoots.