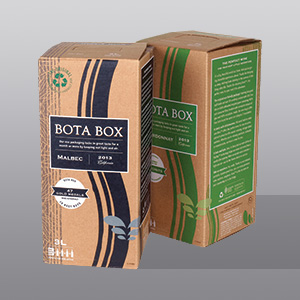 Think Inside the Box

Summer’s finally here, and it’s time for all things casual. And nothing says casual like wine out of a box. But, yuck!, you say. Who wants cheap swill like that? Well, you don’t, and neither do I. Even though it delivers the convenience and economy only a boxed wine can offer, Bota is nonetheless a line of first-rate wines.

Delicato Family Wines, a family-owned California winery founded in 1924, launched Bota Box in 2003, taking inspiration from traditional Spanish wine skins known as “botas”, which were used to carry wine for centuries. “Bota Box is now the U.S. category leader in premium wine in alternative packaging, and its strong performance is driving the growth of the premium alt-packaging category as a whole,” commented Jon Guggino, Executive Vice President of Marketing for Delicato.  The brand has expanded by nearly 3 million cases since 2015, and exceeded the 7-million-case mark in 2019.  So, hardly a boutique operation.

The Bota Box design makes it possible to keep the wine fresh for at least 30 days after opening because there is no exposure to wine’s enemies: light and air (The poly bag inside the box collapses as the wine is removed.) The box itself is made from environmentally-friendly packaging consisting of 100% recyclable, unbleached, post-consumer fiber printed with soy-based inks.
And the box is highly portable. Take it camping, boating, poolside, to picnics, to the beach, or to your next barbecue. And, you don’t have to remember to bring a corkscrew.

Each box holds three liters, or the equivalent of four bottles of wine. With a retail price of about $20, that’s equivalent to five bucks per bottle. Hard to beat these days.

One Reply to “Bota Box”