Riedel of Austria, famous for its varietal-specific stemware, makes both of these glasses, and both are intended for use with brandy and its variants Cognac, and Armagnac.  How is this possible? They could hardly be more different. 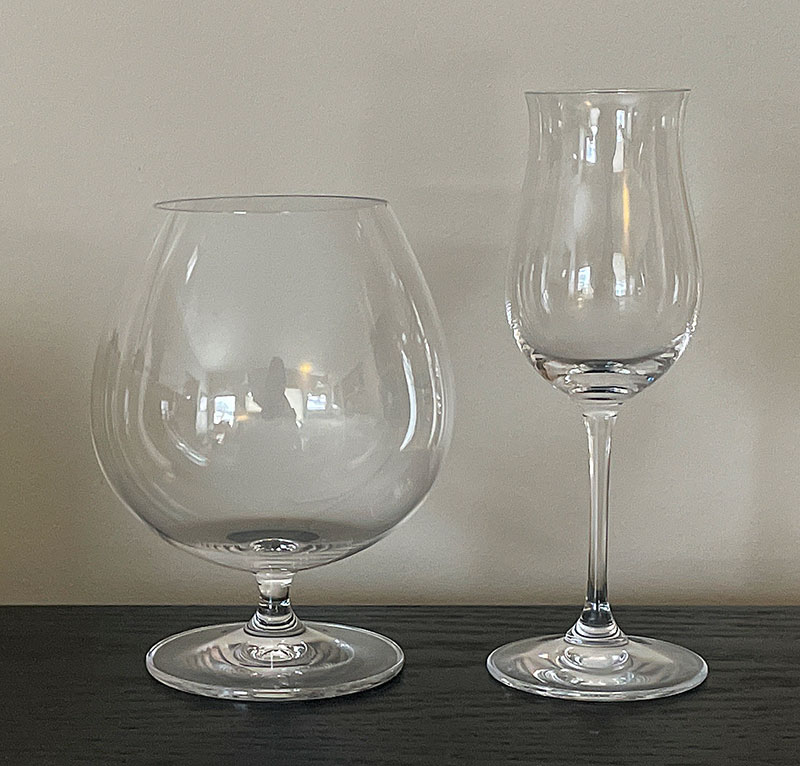 The glass on the left is the iconic brandy snifter, as instantly recognizable as a martini glass.  Its large balloon bowl is intended to display as much of a brandy’s aroma as possible.  And the wide bottom is intended for cradling in the palm of your hand, warming the brandy to further enhance the nose.

The glass on the right, although named by Riedel specifically for Hennessey Cognac, is suited for any brandy, Cognac, or Armagnac, and is the one preferred by connoisseurs and professionals.  The bowl still allows for appreciating the aroma, without accelerating the evaporation like a snifter can, and the tulip shape concentrates it.  A similarly-sized and -shaped wine glass can work nearly as well.

While I enjoy stemware like this, as always my advice is to use whatever you like.  As far as I’m concerned, if you don’t have to slurp your beverage directly off the counter you’re good to go.

Find out more about brandy by listening to the Winervana Podcast Episode 10 – Brandy, Cognac, and Armagnac. 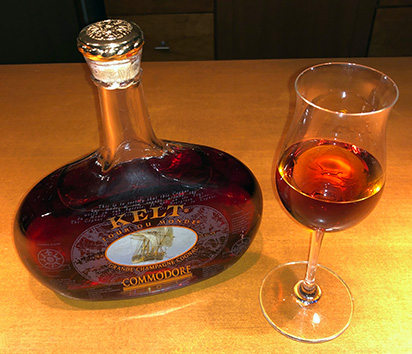 Won’t You Let Me Take You On A Sea Cruise?

First, let’s talk about brandy vs. cognac. Brandy is a liquor distilled from wine and aged in wood. (Brandy can be made from fruits other than grapes as well, but that’s a story for another time.) Cognac is brandy that specifically comes from the town of Cognac and the delimited surrounding areas in western France. (The one which has the most favorable soil and geographical conditions is Grande Champagne.) So, all cognacs are brandy, but not all brandies are cognac. For more detail on cognac, click here.

Until the early 1900s cognac was shipped in barrels. The long sea voyages had a profound effect on the quality of the cognac. When cognac started to be shipped in bottles, many felt something had been was lost. Hoping to recapture that quality, Estonian-born Swedish entrepreneur Olev Keltes established the Kelt Cognac company in 1987. He began his career with the study of the distillation of cognacs as well as madeira, rum, and aquavit. It was this study that led him to rediscover the lost secret that quality improved in spirits that were aged in barrels on a long trip at sea . It is this maturation at sea that sets Kelt apart from other cognac houses.

Kelt continued to expand on this idea, and sent his cognac on its first sea voyage in 1990. The cognac world looked on, many with sceptical eyes. After the voyage, a tasting session was arranged with some of the top names in the cognac industry, and it was with some surprise that the experiment was hailed a great success.

Subsequently, an optimum route around the world was established, and one which all Kelt cognac now follows. The aim of this travel around the world (tour du monde) is to produce cognacs similar to those of the past, where many cognacs and eaux-de-vie were subjected to this epic oceanic journey.

As I’ve mentioned, wood aging is a requirement of all brandies. There are many oak-producing areas around the world which are used for barrel production. The French areas are: Argonne, Vosges, Nevers, Tronçais, Allier, Bourgogne, Armagnac (Landes) and Limousin. Kelt uses principally Limousin oak barrels for ageing. Prior to being loaded aboard ship, the barrels are only filled to just under three-quarters full so that the liquid can move and has a large enough surface for the ideal amount of alcohol to evaporate (between 1 and 2-1/2% per year). The voyage takes from 90 to 110 days, depending on the weather.

During the world tour, the cognac is in contact with wood repeatedly as the cognac is washed around in the barrels. In addition, the temperature rises, especially when passing through warmer climates, which is for most of the voyage. Finally, at sea the air pressure changes constantly. This makes the Limousin oak contract and expand, adding new oxygen and persuading the Limousin oak to part with its most delicate qualities. It is this combination of movement, temperature, and air pressure that Kelt believes makes their cognacs unique.

Once the cognacs return, they are rested for about three to five months before being transferred to bottles.

The company, while sticking rigidly to the production methods of the 18th and 19th century, uses every modern technology possible to promote their cognacs,  and relies heavily on the maritime theme in their marketing efforts. The higher-end Kelt expressions come in a unique bottle shape, based on a French navy decanter from 1740.

According to the company, Kelt Commodore attempts to combine the most interesting qualities of a Grande Champagne VSOP, Napoleon, and XO. The blend is complex and depends heavily on barrel selection prior to ocean maturation. This medium-amber-colored Grande Champagne cognac offers delicate scents of honeysuckle and jasmine, with touches of oak and cedar. There is a long, smooth finish. Although aspiring to the taste profile of an XO, it still maintains the pleasant vanilla and fruit notes of a younger cognac.  Rather than a brandy snifter, I suggest you savor this in a tulip-shaped glass like the one shown at the top of this post. And, no ice, of course.

Kelt Commodore was awarded the title of 2015 Best Cognac at The Wine and Spirits Wholesalers of America (WSWA) Convention and Exposition.