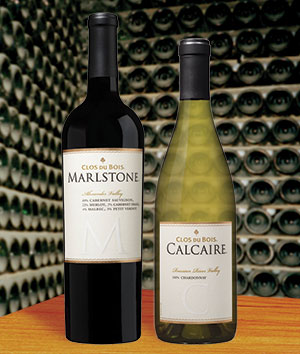 Over the River and Through the Woods

Although it sounds French, the Clos du Bois [klow doo bwa] winery is definitely American. Clos du Bois was founded in 1974 by Frank Woods, who planned on simply naming his new winery “Woods Vineyard.” His children, who were studying French at the time, suggested the more exotic “Clos du Bois” instead, which loosely translates to “enclosure in the woods.”

Clos du Bois is located in Sonoma County’s Alexander Valley, northwest of Napa Valley. I’ve long been a fan of wines from this AVA (American Viticultural Area); they’re always reliable, and when made with skill and care can be exceptional.

Clos du Bois’ estate vineyards (those vineyards owned by the winery) are influenced by the ocean winds and fog that moderate late afternoon temperatures in the growing season, as well as by the Russian River, which runs through the valley, and eons ago laid down the well-drained, gravelly soil types on which grapes thrive.

The winery’s initial releases included a Chardonnay, Pinot Noir, and Cabernet Sauvignon. Merlot, and Sauvignon Blanc were added in the ‘80s, followed by Zinfandel in the early ‘90s to round out the portfolio.

Today, Clos du Bois makes an extensive variety of wines in three distinct series. The Classic series is value-priced and widely available. The Sonoma Reserve series focuses on specific appellations within Sonoma County, revealing the special characteristics that makes each unique. The Proprietary series are limited quantity selections personally overseen by winemaker Erik Olsen. The following wines are from the Proprietary series.

Named for the soil from which it comes, Marlstone stands as Sonoma County’s first Bordeaux-blend red wine. The initial vintage was 1978, and a consortium of California winemakers would go on to later designate this style of winemaking ‘meritage.’ (See the Wine Terms page.)

This smooth, balanced wine started in 100% French oak barrels for 18 months. It is rich, dark purple in appearance. The nose shows youthful blackcurrant fruit supported by cedar and tobacco. The flavor follows the aroma and offers chewy tannins, a nice extraction of fruit, and moderate oak.

Serve this wine with rich dishes such as chateaubriand with bernaise sauce, grilled lamb chops with garlic and rosemary, or prime rib of beef.

Calcaire is French for chalky or limestone, reflecting this wine’s Russian River Valley terroir. (See the Wine Terms page.) The wine was barrel fermented in French oak and aged for eight months. In the glass, the color is medium gold with an unassuming nose. This Chardonnay exhibits flavors of lively citrus, baked apple, and lemon custard. The oak and minerality are present, but well integrated into the whole.

Pair this elegant wine with lobster in lemon butter, salmon souffle, or spaghetti with clams.