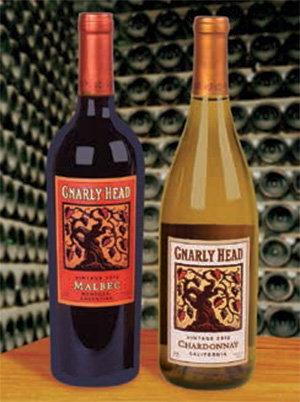 And, where does that unusual name come from?

In 2005, the founders of Gnarly Head went in search of a vineyard suitable for making the Zinfandel they dreamed of. They found it in Lodi, when they came upon some of the oldest vines in California. Old vines are also known as heritage vines, old world vines, and most importantly gnarly vines. The 30- to 80-year-old vines have twisted, old trunks and branches sprouting in all directions—truly gnarly heads. The free- standing mop-topped ‘head trained’ vines found in these old vineyards were the nursery for Gnarly Head Old Zinfandel. Grapes from these old vines are small and few, but offer the big flavor the winemakers were looking for.

Since 2005, the winery has expanded to include a total of nine selections in the house style, including the original Zinfandel, Cabernet Sauvignon, Merlot, Pinot Noir, a red blend and a white blend.

If you are not a big fan of Chardonnay, especially in the oaky style, this could be the one for you. Gnarly Chard is almost colorless in the glass, it is so pale. The nose features suggestions of melon and pineapple.

These flavors continue on the palate, which also adds pear, plenty of citrus, and a touch of vanilla on the finish. It’s much like a Pinot Grigio, although Gnarly Head makes one of those, as well. The 2012 Gnarly Head Chardonnay is crafted using grapes from specially selected vineyards in Lodi and Monterey.

Spring may seem impossibly far away now, but it will be here before we know it. When it does arrive, have this wine ready to pair with Tuna au Poivre, Sea Bass with Olives and Roast Tomatoes, or Poached Chicken with Avgolemono Sauce.

Although based in California, Gnarly Head isn’t afraid to travel the world in search of wines that match their product philosophy, in this case down Argentina way. Famous as the epicenter of Malbec, Mendoza abuts the eastern foothills of the Andes, 220 winding miles from Santiago, Chile.

The vineyards of Mendoza are some of the highest in the world. The difficult sandy soils there stress the vines, leading to concentrated juice.

This 2012 was Gnarly Head’s inaugural Malbec offering. The deep-purple color in the glass follows on with aromas of dark berry fruits. The fruit character was preserved by aging the wine for six months in split lots, some in oak and some in stainless steel to restrain the tannins (but not too much). Finishes with plenty of blueberry and blackberry.