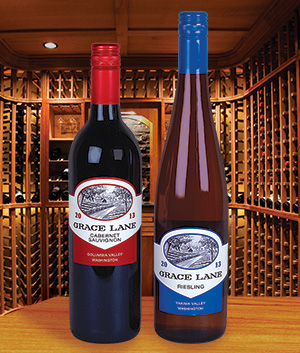 Grace Lane wines are sourced from a family-owned winery in Mattawa, Washington, population 4,467, nestled in a bend of the Columbia river and 152 miles southwest of Seattle. The family had been farming in the area since the mid-1950s, and believed that the region’s moderate temperatures, low rainfall, and sandy soils would be ideal for wine grapes, and planted their first grapevines in the area in 1997.

But winemaking in Washington has a much longer history, of course. It began in 1872, when a winery on Stretch Island crushed a native American grape called Island Belle. After a brief flourishing, the scourge of Prohibition and even some of the state’s own tariff laws crippled the industry until the mid-1960s. However, the state now boasts over 200 wineries, and is well on its way to regaining its place on the wine map. Indeed, it is second only to California in American wine production.

The Columbia Valley is the largest wine-growing region in the state. It is a designated AVA [American Viticultural Area], and includes 1,152,000 acres in south-central Washington, and part of northern Oregon as well. Only about 29,000 acres are under cultivation, but that is enough to include 99 percent of Washington’s vineyards. Within the very large Columbia Valley AVA, subdistricts of Yakima Valley, Red Mountain, Walla Walla, and Puget Sound are also recognized.

To the west, the Cascade Mountain range protects the area from the cool weather coming in from the Pacific Ocean, making the Columbia Valley the warmest growing area in the Pacific Northwest. Unlike the western half of Washington, it also has the drier climate that quality winemaking requires. Because of the varying temperatures throughout the region, different grape varieties do well in its various locations, although white wines dominate.

If you like your wine sweet and easy, this could be the one for you. It shows light straw yellow in the glass. Next come the aromas of green apple and white peach. The flavor profile (officially “medium sweet” on the International Riesling Foundation’s sweetness scale) is soft and delicate, with suggestions of those same tree fruits and hints of spice box. The acidity is relatively low.

Enjoy this wine with Balsamic Glazed Salmon, Crab Cakes with Honey-Yogurt Salsa, or Sole with Grapes and Champagne.

With a color of dark garnet, this Cab begins with aromas of fresh-baked brioche and ripe plum. The flavors of dark fruit, prune, and black tea are fairly assertive at first, but soon settle down into a nicely balanced whole. Perhaps predictably, this wine is definitely different (in a good way) if you are used to California Cabs.

Pair this up with Smoked Salmon and Wild Rice Cakes with Paprika and Green Onion Aioli, Pork with Apples and Cider Cream Sauce, or Potato and Morel Mushroom Manicotti.