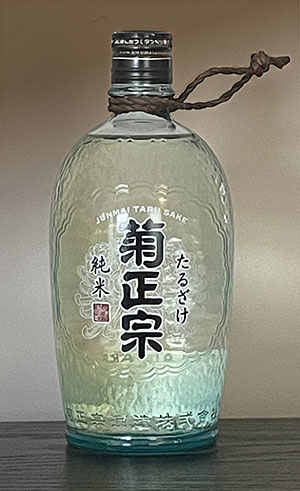 Saké is often called rice wine, but that is a misnomer.  While it is an alcoholic beverage made by fermentation, the production process more closely resembles that of beer, and it is made from grain (rice, of course), not fruit.  To make saké, the starch of freshly steamed glutinous rice is converted to sugar and then fermented to alcohol.  Once fermented, the liquid is filtered, heated, and placed in casks for maturing.  Sakés can range from dry to sweet, but even the driest retain a hint of sweetness.

You can read more about the history of saké and the specifics of its production here.

Kiku-Masamune Saké Brewing was founded in 1659, when Japan was ruled by Ietsuna, the fourth Tokugawa shogun.  Unusual among saké producers, Kiku-Masamune’s entire product line is classified as dry.

Things began when the Kano family built a saké brewery at their residence. At the time, the Nada region in Kobe, Japan, where they lived, had not yet become well known for its saké, but the subsequent popularity in Tokyo of saké from Osaka and Kyoto, known as kudarizake, led to a rapid surge in demand for saké from the Nada area.

During the Meiji period (1868 to 1912), Jiroemon Kano, the eighth head of the family, pioneered improvements in technology and other initiatives to increase the quality of their saké in the service of the ideal of “doing whatever it takes to create a better saké.”  It was during this period that the Kiku-Masamune brand was registered as a trademark.

From the Meiji period to the Taisho period (1912 to 1926), the company increased overseas exports and served as a purveyor to the Imperial Household Agency, an arm of the government of Japan in charge of state matters concerning the Imperial Family, and also the keeping of the Privy Seal and State Seal of Japan.

The brewery managed to survive the hardships of the tumultuous Showa period (1926 to 1989), which included the rise of militarism in Japan; Japanese aggression in China and elsewhere in east and southeast Asia; World War II and Japan’s defeat; and the post-war struggle to rebuild, which ultimately succeeded, and spectacularly so.

Just four years after the end of the war, a 1949 opinion survey conducted in six of Japan’s largest cities by a brewing-industry newspaper asked respondents to identify the saké brands they preferred to sell and the brands that they believed offered a particularly high level of quality.  Kiku-Masamune took top place in three cities and led in the overall results.  The company Is headquartered in Kobe, Japan, where it began, with four additional branch offices.

Kiku-Masamune uses one of the oldest production regimens, called “kimoto.”  This approach originated during the Edo period in the late 17th century.  In the kimoto method, a combination of rice, water, and koji (the mold that drives fermentation) is added to small tubs and then mashed into a paste by brewers using a special pole.  This is done with two workers to a tub, standing at opposite ends and alternating sides as they stir.  In this ancient tradition, the brewers sing rhythmic songs in order to work in unison and keep the poles from clashing. Some songs are from whatever brewing guild the toji (Master Brewer) belongs to, and some are specific to the brewery itself.  Due to the fact that this approach, which takes four weeks from start to finish, consumes about twice as much time and effort as other methods, only a very few of the more than 1,000 saké breweries in Japan employ it.

At its most basic, only three ingredients are needed to make saké: water, rice, and koji.  Because of this simplicity, the kinds of water and rice play major roles.

Miyamizu is well water drawn from a particular area beneath Nishinomiya City, and is one of the reasons Nada saké became nationally famous.  This water contains almost no iron, yet is rich in minerals such as calcium, potassium, magnesium, and phosphorus. The mineral content provides nutrition for the koji as well as a variety of other microbes, and drives a robust fermentation.

Kiku-Masamune has long used only Yamada-nishiki brewer’s rice . This rice, grown specifically for saké, is characterized by a larger grain size than normal rice varieties, low protein content, and a soft consistency that allows the koji to more easily penetrate the rice.

Saké classified as Junmai has no added alcohol. Until recently, at least 30% of the rice used for Junmai saké had to be milled away, but Junmai no longer requires a specified milling rate.

Taru saké is matured in barrels made of Yoshino cedar.  Ideally, the saké is drawn from the barrel and bottled just as the resulting cedar aroma reaches its peak. 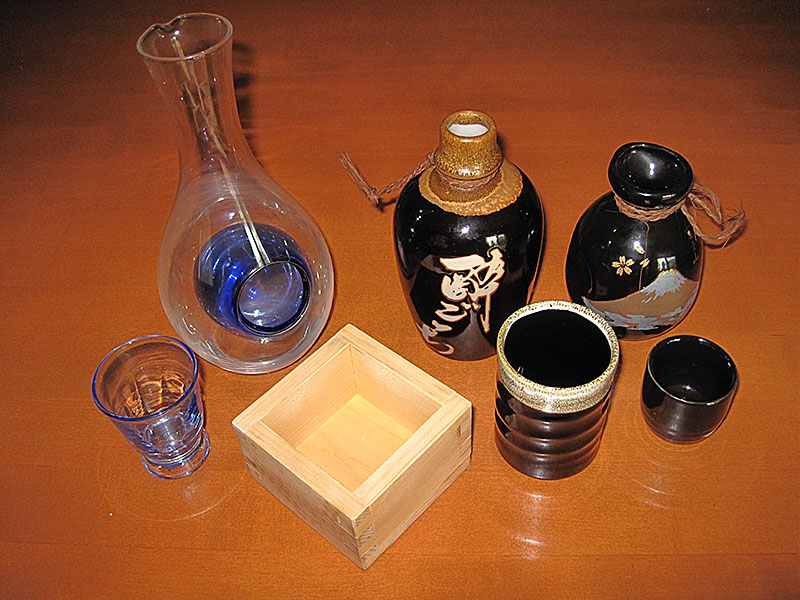 Two tokkuri bottles are on the right.

A tokkuri is traditionally used for serving. The saké is transferred from the original bottle to the tokkuri, then poured in the drinking vessel.  The tokkuri can be immersed in warm water for heating; the bit of twine at the neck is used to pull the bottle out of the warm-water bath.  This saké is also available in the more-usual tall green bottle.

Both in the nose and on the palate, this crystal-clear saké  predominately features aromas and flavors of melons.  There is less cedar character than I expected (disappointingly), and it is nicely dry.   The mouthfeel is smooth and approachable.   It can be served chilled, which I recommend, at room temperature, or at Nurukan temperature (about 113 degrees F.).  ABV is 15%.

The SMV (Saké Meter Value) measures the density of saké relative to water, and is the method for gauging the dryness or sweetness of saké. The higher the SMV, the drier the saké. The range is from -15 (sweet) to +15 (dry), and this one comes in at +5.

One Reply to “Kiku-Masamune Taru Sake”