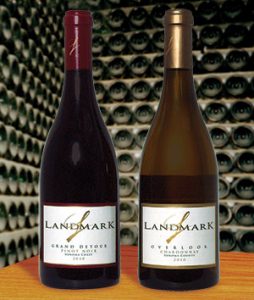 Since its founding in 1974 by Damaris Deere Ford, great-great granddaughter of John Deere, Landmark Vineyards has called Sonoma County home. Originally located in Windsor, California, in 1989 Landmark moved to the heart of Sonoma valley to escape the encroaching urbanization to the north.

In 1991, Landmark decided to focus primarily on Chardonnay. This effort was reinforced in 1993 when they retained the highly-regarded winemaker and consulting enologist Helen Turley, who has also worked for wineries such as Pahlmeyer, Bryant Family Vineyard, Colgin, and Blankiet. Turley is credited for being one of the first people in the early 1990s to see Sonoma’s potential for world-class wines, particularly Chardonnay. The work came together nicely in 1997, when Landmark’s 1995 Overlook Chardonnay landed a spot on the Wine Spectator’s Top 100 List, the first of seven such appearances.

After harvest and pressing, the juice for this wine is racked into French oak barrels. There, indigenous yeasts carry out the primary fermentation. This traditional practice allows a medley of yeast species to each contribute its own unique flavor components to the wine. Next comes a second malo-lactic fermentation. The wine then spends eight to ten months in barrel sur lees, after which it is finally blended.

In the glass, this wine is a pale gold tinged with green. The nose offers aromas of grapefruit and preserved lemon. The citrus theme continues on the palate, abetted by good acidity and just enough oak to temper and mellow the flavors.
Serve this up with Chicken Breasts with Artichokes and Mustard Sauce, or Sea Bass with Gingered Broth.

This Pinot Noir shows that Landmark has a way with reds as well as whites. Grand Detour is sourced from five vineyards in the cool-climate Sonoma Coast appellation. The climate of this region allows the wine to mature at a leisurely pace to improve structure and develop tannins.

This wine is medium brick in color, with a nose of wild strawberries and plums. The taste follows through with plum and other stone fruits. There is plenty of body (especially for a pinot noir) supported by tart tannins.

Salmon en Papillote would be a classic pairing with this wine. Also consider Veal Scallopine with Lemon and Capers or Roasted Pork Loin with Apricot-Armagnac Compote.