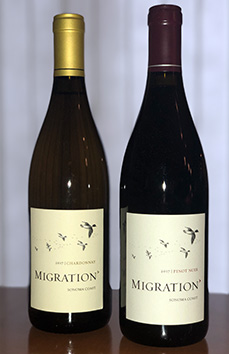 Duckhorn Portfolio is the umbrella corporation of an expanding wine mini-empire. First came the flagship Duckhorn Vineyards, established in 1976 by Dan and Margaret Duckhorn to pioneer and feature premium Napa Merlot. (Duckhorn has a “second growth” label named Decoy, as well.) Next came Paraduxx in 1994, specializing in Zinfandel-based blends. This was followed by Goldeneye, which began making Pinot Noir in 1996.

Migration was initially guided by young rising-star winemaker Neil Bernardi. A native of northern California, Bernardi studied at the University of California, Davis, the academic epicenter of California viticulture. After taking degrees in Italian and enology, Bernardi set off for New Zealand and found work with Saint Clair Estate, Cape Campbell, and Kim Crawford there. Once back in the States, he became assistant cellarmaster at Quintessa in Saint Helena, California, and then moved on to Littorai in Sonoma in 2007. He joined the Duckhorn family as enologist at Goldeneye. Bernardi became Migration’s winemaker in 2009. He has stated, “Traditionally the character of a particular wine is connected to a specific place. Migration offers a different paradigm. We are starting with a clearly defined style and exploring how that style can be expressed in different regions.” Following his success at Migration, Neil is now Vice President & General Manager – Kosta Browne, Canvasback.

In 2014, Migration acquired the Running Creek Vineyard, located in the heart of the Russian River Valley. This Estate vineyard features 70 acres of Pinot Noir vines and 20 acres of Chardonnay.

In 2017, following her tenure as the winemaker for Decoy, Dana Epperson became the winemaker for Migration, where she has established a reputation for a style of winemaking that seamlessly balances vibrancy and finesse.

Although starting in the Russian River Valley in the inland Santa Rosa area, Migration has continued to expand their sources, heading towards vineyards near the coast for these selections.

There was plenty of rain in Sonoma in the winter and spring of 2017, followed by a warm summer.  A major heat spike occurred just as this fruit was coming to ripeness, requiring fast-paced hand-picking at night.

Pale gold in the glass, this wine has a dominant nose of lemon, with trailing aromas of apple and pear.  The citrus notes of lemon and grapefruit continue on the palate, abetted by hints of vanilla and baking spice. Quite good acidity.

The Pinot Noir is 100% varietal, and matured for 10 months in 100% French oak,  35% new and 65% neutral. Sourced from six vineyards in the Green Valley, Russian River Valle,y and Petaluma Gap. A blend of more than 80 small lots of wine that winemaker Epperson has to work with. Excellent quality and value considering the huge production of 23,000 cases.

One is greeted by a bright, festive red color, with cherry and blueberry aromas.  The taste is of tart cherry, cranberry, and subtle oak. The wine is quite dry, silky,  and supported by a backbone of well-balanced tannins. It ends with a medium-length finish.

For a look at another Migration Chardonnay and Pinot Noir, click over to: