Not even the Greek-Americans I know will drink Retsina.  Quite a bold position, considering it is routinely called the “iconic wine of Greece” and is ingrained in the food and drink culture of the nation.

And I don’t understand their reluctance.  I’ve been enjoying Retsina for decades, although I will admit it’s in part because of Retsina’s origin story.   More on that in a moment.   The traditional grape for Retsina is Savatiano with Assyrtiko and Rhoditis sometimes blended in. Modern Retsina is made following the same winemaking techniques as white wine, with the exception of small pieces of Aleppo pine resin (!) being added to the must during fermentation. (It remains to be seen what effect this past summer’s wildfires in the Greek pine forests  will have on resin production.)  It is this pine resin that gives Retsina its name, as well as its unique flavor profile.  The resin exudes an oily film on the surface of the fermenting liquid;  after racking, the wine is clarified and the solids and surface film are removed.

Nowadays, much less resin is used than traditionally called for. Such wines lack the pungent “whiff of turpentine” of old.  Indeed, it seems to me the resin content goes down every year.  Frankly, I miss that resin punch, and, ironically, even as producers seemingly try to make the wine more accessible, fewer people are willing to try it.  Regardless, it is considered an ideal accompaniment to such flavorful Greek dishes as saganaki, pastırma or garlic dips, which are often consumed as appetizers.

But the legend is far more interesting.  It centers on the siege of Greece by the Romans in the second century B.C.  As the invaders plundered everything that came their way, the beleaguered Greeks were determined to deny them the wine.  “You will take our freedom . .  but you will not enjoy our wine!” they reportedly cried.  It was deliberately tainted with the now-famous pine resin, and in fact the Romans refused to drink it.  Once the war was over, however, and the Greeks had prevailed, it was time to celebrate.  But, all of the available wine had been dosed with pine resin.  What to do?  Well, drink it anyway, of course, and acquire a centuries-long taste for it!

Founded in 1999 by brothers Aristides and Stathis Spanos, Tetramythos Winery is a boutique operation situated at Ano Diakopto of Egialia in the northern Peloponnese peninsula in the south of Greece. As far back as 150 AD the geographer Pausanias referred to the local villages as ideal for the cultivation of grapes. 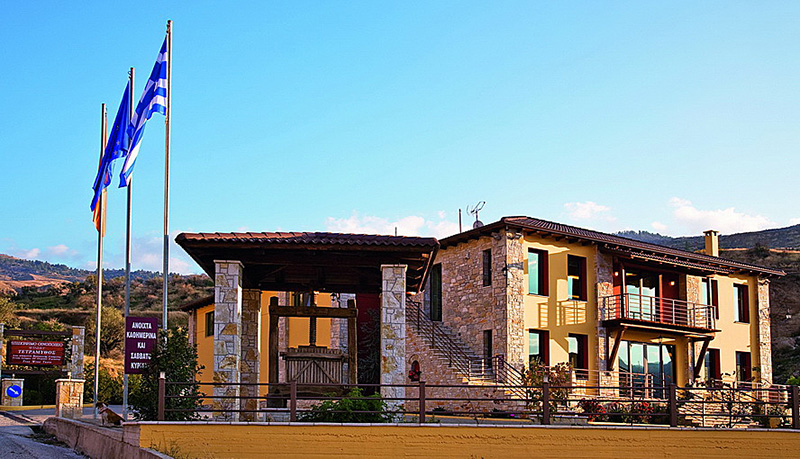 The Tetramythos winery, completed in 2004.

There are 35 acres of vineyards [14 hectares]. The vines are planted in soils that are limestone-rich and at altitudes of 1,965 to 3,450 feet (600 to 1050 meters) on the slopes of Mount Aroania. The vines are certified organic by the Greek DIO organization, and winemaking is as natural as possible. These are true cool-climate vineyards, mostly north-facing, where breezes from the gulf of Corinth help produce fresh and balanced fruit. Indigenous and international grape varieties are grown, including Roditis, Mavro Kalavritino, Agiorgitiko, Malagouzia, Sauvignon Blanc, Merlot, and Cabernet Sauvignon. 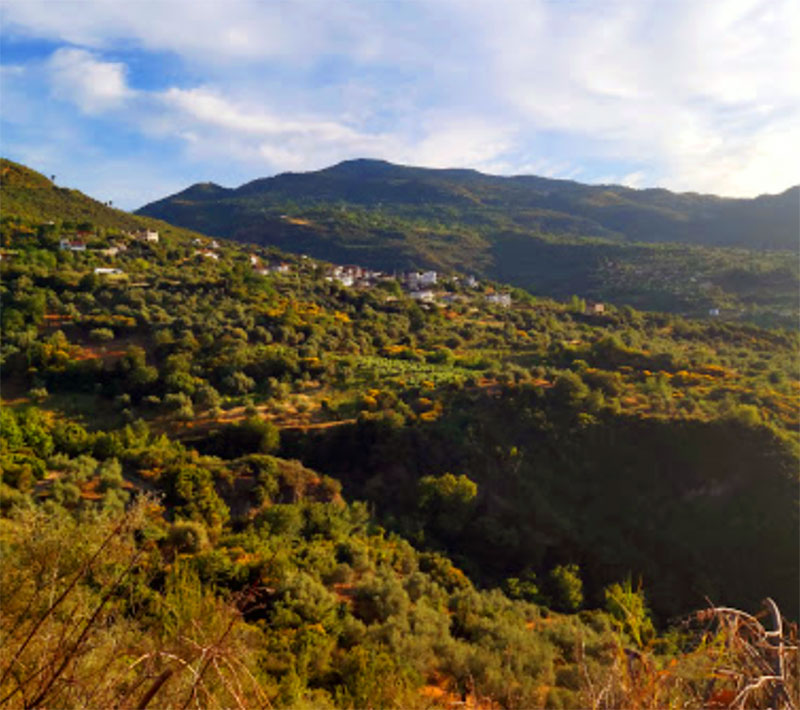 Inside the winery, small stainless steel tanks enable small-scale vinification suited to each varietal and vineyard. There are also underground ageing and barrel cellars. and a wine bar.

Panayiotis Papagiannopoulos, the winemaker, hails from the area.  He is known for being one of the most innovative wine producers in Greece; humble with great dedication, he has saved local grapes from extinction, and has researched how to use traditional amphora of the past with modern production methods.

This pale yellow wine is, unusually, 100% Roditis that has been aged for up to two years.  It has a mildly aromatic nose.  There is just a whisper of pine resin on the palate, which is dominated by citrus, especially lemon, with good acidity and a bit of chamomile on the finish.  This is a pleasant, refreshing quaff, but not really my idea of a Retsina. ABV is 12.5%.