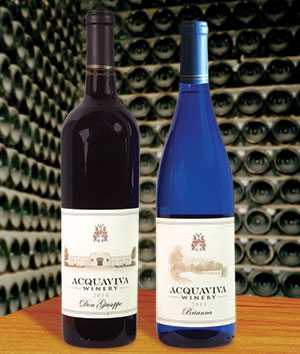 A Vino You Can’t Refuse

Although the address is officially in Maple Park, Illinois, Acquaviva Winery and Bistro is on a very rural stretch of Illinois Route 38, 60 miles due west of Chicago. The faux-Italianate building incongruously appears, mirage-like, as you approach.

As a child, owner Vito Brandonisio would visit his grandfather’s small vineyard in Acquaviva delle Fonti in Bari, Italy. The lessons and memories formed there carried through to adulthood as he became an amateur winemaker.

In 2002, Brandonisio fulfilled a lifelong dream of having his own wine estate when he purchased 40 acres in Maple Park, naming it Acquaviva in honor of his homeland and his grandfather. Determined to produce his wines from indigenous local grapes, here he planted such hardy Midwest varietals as Prairie Star, Brianna, Chardonel, Marechal Fosh, and Frontenac, types largely unknown even to seasoned wine connoisseurs.

By 2007, it was time to build a winery to make use of the maturing grape vines. This 20,000 square foot facility is to the north across Route 38 from the estate acreage, and in addition to the winery itself (housed on the basement level), it includes a tasting room, the bistro, a retail market, and private party facilities. Tours are available by reservation; a fee of $10 to $30 is charged, depending on tour selected.

Acquaviva encapsulates the American experience. Brandonisio is Italian, of course, his grapes are American, and his current winemaker, Sergio Benavides, is Chilean.

Personally, I’m not a fan of sweet wines with the dinner entrée. However, I realize many others don’t share my position (white zinfandel, anyone?). This Brianna is almost completely colorless in the glass. The nose features scents of peach and honeysuckle. It is indeed sweet, with flavors of pineapple, peach, and a hint of apricots.

Although not a true dessert wine, Brianna can convincingly fill in as one. This would pair nicely with Sweet Pastry Fritters, Almond Cake, or Mixed Berry Pizza.

This red blend is made entirely of Illinois grapes, although the varieties are not specified. It is surprisingly grapey on the nose, but fear not, this is no Concord.

This wine was barrel-aged for twelve months. The color is dense purple, and it has good legs. On the palate, it is quite approachable and well-balanced, with understated tannins that add just enough structure. The dominant flavors are dark berries, cedar, and a hint of black pepper, not unlike a Zinfandel, although there is none in the blend.