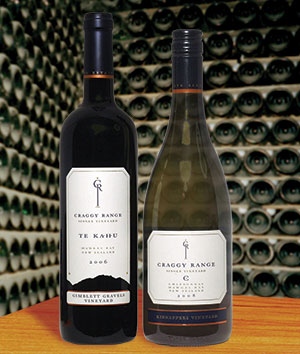 Wines from the Wasteland

Although wine production started in New Zealand as early as 1819, that nation of beer drinkers didn’t really start to get serious about it until the mid 1960s, time-wise much like California. Real success didn’t come until the early ‘80s, however, with the varietal New Zealand has become famous for, sauvignon blanc. The first release to get wide attention was the 1979 from Montana Wines (New Zealand’s biggest wine maker) and an even more compelling product followed from Cloudy Bay Vineyards in 1985, finally putting “the land of the long white cloud” on the world’s wine-making map.

In 1876 the Ngaruroro River in the Hawkes Bay region severely flooded and changed course, leaving behind a large new tract of gravelly soil. At first, the plan was to turn this infertile ‘wasteland’ into a quarry. Before that project got underway, however, local winemakers claimed the land as their own and began planting vines.

Terry Peabody and Steve Smith established Craggy Range in Hawkes Bay in 1997, recognizing the area’s potential to deliver first-rate wines. Their goal was to make single-vineyard wines – wines that are true expressions of the vineyard’s terroir.

Peabody handles the ‘front office’ at Craggy Range, while Smith is the senior winemaker and certified Master of Wine. Decanter magazine and Wine and Spirits magazine have named him as one of the fifty most influential people in the world of wine.

Kidnappers Vineyard is located on the Hawkes Bay coastline at Te Awanga where the climate is warm and sunny and the soil is predominantly clay loam.
This wine introduces itself with a very pale straw color and lemony nose. The citrus notes continue on the palate, abetted by tastes of mineral and oyster shell. The finish suggests clove and grapefruit.

Te Kahu means The Cloak in the native Maori language. Legend has it that the mists rolling down the valley are the cloak of a beautiful maiden laying at the feet of her lover, the fallen giant Te Mafa.

This lean, restrained wine is a classic Bordeaux blend of 58% Merlot, 22% Cabernet Sauvignon, 15% Cabernet Franc, and 5% Malbec, and is very much in the European style. The bouquet offers notes of dark plum, blueberry, cedar, and a hint of oak. The palate adds elements of earth and dusty cocoa powder supported by moderate tannins. The finish is relatively short.

Let this wine breathe for at least two hours, then serve with Paprika Chicken or Braised Lamb Shanks with White Beans.