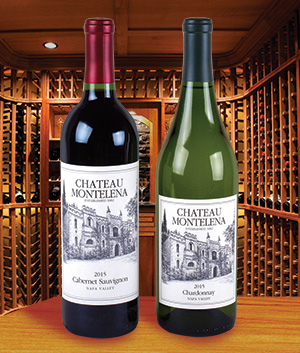 In 1976, an Englishman who owned a wine shop in Paris hit upon the idea of holding a blind tasting pitting ten of France’s and California’s best producers against one another. He enlisted nine French wine experts as judges; the French wines included the 1970 Haut-Brion, the 1970 Mouton Rothschild, and the 1973 Domaine Leflaive Puligny-Montrachet Les Pucelles.

The famous tasting has come to be known as The Judgement of Paris. No one expected the upstart Yanks to really put up a fight against the French heavyweights. However, when the votes were tallied, the judges were shocked to discover they had awarded the top prize for the red to the 1973 Stag’s Leap Wine Cellars Cabernet Sauvignon, and top prize for the white to Chateau Montelena Chardonnay, both from Napa Valley. It was the shock heard ‘round the world, and legitimized California as a world-class wine-making region.

Chateau Montelena has seen three cycles of family stewardship. The winery was founded in 1882 by Alfred L. Tubbs, a European immigrant and entrepreneur. The original property was 254 acres of rugged, stony, and loose land just two miles north of Calistoga at the base of Mount Saint Helena. (Montelena is a contracted form of Mount Saint Helena.) By 1896 Tubbs’ winery was the seventh largest in the Napa Valley.

The Tubbs family sold the winery in 1958 to Yort and Jeanie Frank, who were looking for a peaceful spot to retire. The setting inspired Frank to excavate a lake and add landscaping to reflect the Chinese gardens of his homeland.

The modern renaissance of Chateau Montelena started under the leadership of Jim Barrett, who purchased the winery in 1972. The vineyard was cleared and replanted, and the chateau was renovated and outfitted with modern winemaking equipment, complemented by the highest-quality grapes from the Napa Valley. Shortly thereafter, Chateau Montelena stunned the wine world with its win at the 1976 Paris Tasting.

This wine is brilliantly clear with a golden-straw color. The nose suggests pineapple and stone fruit. On the palate, there are flavors of fresh orange zest and ginger which segues into a long and spicy finish. The wine was aged for 10 months in 100% French oak.

Serve this legendary wine with whitefish with filbert and lemon sauce, chicken Marsala, or duck with mustard and leeks.

Dark ruby in color, this wine offers rich, complex aromas of fresh raspberries, strawberry jam, vanilla and black pepper. In the mouth, this wine makes a full soft round entry, after which the acid builds nicely, supporting the dominant flavor of dark stone fruit. Plenty of fine-grain tannin completes the mouthfeel, followed by a tremendous long finish.

Pair this Cabernet with beef in wine on skewers, grilled pork New Orleans, or leg of lamb in balsamic vinegar.

For a review of two earlier vintages of these wines, see: