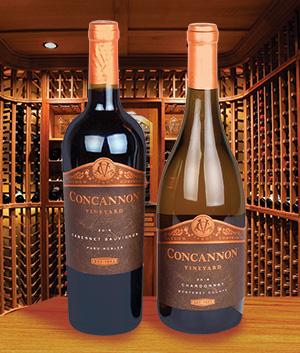 The Concannon story began in 1865 when James, then an 18-year-old boy, courageously set sail from the rocky coast of Ireland’s Aran Islands to seek opportunity in America.

Even at such an early age, Concannon recognized that the terroir of the Livermore Valley in California’s central coast region was strikingly similar to the premier vineyards of Bordeaux. So, in 1883 he established Concannon Vineyard with a selection of high-quality vines which he imported directly from Bordeaux, including from renowned Château Margaux and Château d’Yquem.

Concannon worked closely with early California viticulture leaders Charles and Clarence Wetmore to determine if California could be a successful winegrowing region. Their efforts paid off at the 1889 International Paris Exposition when the Livermore Valley became the first American Wine Region to win international gold medal awards, including the Grand Prix.

Captain Joe Concannon (son of James) kept Concannon Vineyard continuously operating throughout the scourge of Prohibition by making and selling sacramental wine. This prevented the destruction of the winery’s 1893 Château Margaux Cabernet Sauvignon root stock and other historic Bordeaux vines.

In the early 1930s, Captain Joe became one of the first in the world to bottle Cabernet Sauvignon as a single varietal wine. During the 1950s, he hired one of the first formally-trained female winemakers, Katherine Vajda, to serve as Concannon’s lead winemaker.

In 1965, grandson Jim collaborated with UC Davis in selecting cuttings from one of Concannon’s Margaux ancient vines. These dynamic, high-quality cuttings became known as Concannon Cabernet Clones 7, 8, and 11. Today, an estimated 80% of California’s Cabernet Sauvignon is planted with Concannon Clones.

In 2008, John Concannon took over the leadership from his father as fourth-generation vintner. In 2009, Concannon Vineyard was one of the first wineries in California to become Certified Sustainable. During this time the estate winery also completed a 10-year revitalization project.

The nose of this wine features aromas of honeysuckle and grapefruit. It’s pale yellow color doesn’t prepare you for the unctuous, creamy mouthfeel. The grapefruit repeats on the palate, as well as lemon custard.
Serve this voluptuous and slightly sweet Chardonnay with lemon halibut almondine, salmon à la king, or raisin-turkey surprise.

An excellent value, this Cabernet is rich garnet in the glass. It greets you with hints of leather and floral notes. Then come flavors of big dark fruit, red plum, and vanilla, supported by balanced acidity and bracing tannins. It ends with a nice long finish.