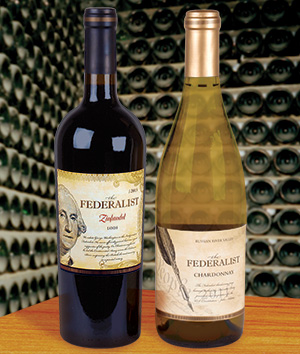 We the People
(Who Drink Wine)

The Federalist, later known as The Federalist Papers, is a series of tracts written in support of the ratification of our nascent nation’s Constitution. The Federalists believed in strong national government, supported modernization, manufacturing, and industrial development, and the use of a tariff to fund the Treasury. (That’s the IRS, folks.) They supported a national Bank of the United States, and funding national and state debts incurred during the Revolutionary War. In foreign affairs the Federalists opposed the French Revolution, and sought a strong army and navy. Noted Federalists were: Alexander Hamilton, James Madison, John Jay, George Washington, and John Adams, the only Federalist president of the U.S.

The Federalist wines are produced by the somewhat mysterious 2Sons Winery, which is owned and managed by the Terlato Family wine empire. The vineyards and winery were founded in 1981. Three friends, John Grace, Mark Rafanelli, and Philip Staley (so why isn’t the winery named 3Sons? See? Mystery.), joined forces and purchased the site that was formerly the Alderbrook Estate. In 2000 the Terlatos were asked to develop a long-range plan to produce world-class wines and market 2Sons throughout the U. S. The Terlatos later purchased a majority share, and invested in both vineyard sources and winery to provide the winemaking team with the best grapes and equipment available. This has helped position the winery to produce single vineyard and estate wines with an on-going focus on Zinfandel.

This golden Chardonnay hails from the Russian River Valley AVA’s northern end near Healdsburg, approximately 80 miles north of San Francisco. Things start out with aromas of lemon and green apple. The lemon continues on the palate, with the addition of lime and pear. All of this means a bracing acidity, of course. The oak is certainly present, adding to a round, rich mouth feel, as is just a hint of sweetness. The nicely long finish features hints of cinnamon and bitter almond.

Separate Chardonnay blocks were barrel fermented in 30% new oak and aged in barrel for nine months. 2500 cases were produced.

This food-friendly wine calls for an Artichoke and Leek Frittata, Dungeness Crab Risotto with Lemon and Parsley, or Steamed Mussels with Saffron Aioli.

We now travel from 80 miles north of San Francisco to 80 miles east, to the vineyards near Lodi, which produce about 18% of California’s wine grapes, more than Sonoma and Napa combined. The area is particularly hospitable to Zinfandel, a uniquely American grape, and this wine is no exception.

The nose reveals red fruits: cherry with a bit of plum. This dark-purple wine features flavors of blackberry, plum, and cinnamon. It also includes Zinfandel’s characteristic pepperiness, which some winemakers are moving away from.

One Reply to “Federalist Wines”