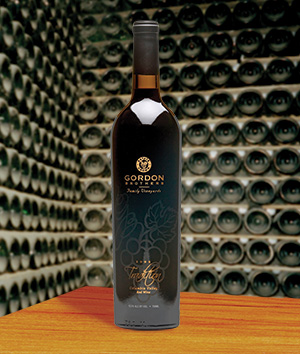 Jeff Gordon (no, not that Jeff Gordon) is a fourth-generation farmer, born and raised in Washington state. Although tied to the land, Gordon realized early on that affection wasn’t enough, and was shrewd enough to take a Bachelor’s degree in Agriculture in 1971.

By 1977, Jeff and his brother Bill were growing potatoes on 130 acres of rented farmland. Several years later, Jeff’s attention to the local microclimate and rich volcanic soil of southeastern Washington’s Columbia Valley led the Gordon family to take the then-audacious step of planting wine grapes on a sagebrush-covered slope overlooking the Snake River. Much to the amusement of local fellow farmers, Jeff made a bold decision to plant red grape varietals. “As far as everyone was concerned, the Columbia Valley was Riesling country. That was all there was to it. We thought red grapes would work. We took a chance. It was the right thing to do.”

This wine is a blend of 47.6% Cabernet Sauvignon, 47.6% Merlot, and 4.8% Syrah (all from estate-grown grapes). After pressing and fermentation, the wine aged in oak for a total of 40 months.

Tradition is a jewel-like ruby in the glass. The nose features hints of cinnamon and clove. The velvety mouth-feel is complimented by restrained flavors of dark cherry and chocolate, and moderate tannins.

This very food-friendly wine will pair well with autumnal meats such as roast duckling with soy sauce and cloves, or braised lamb shanks.