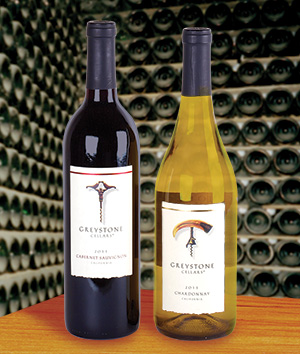 From 1950 to 1989, the Christian Brothers produced their wines in the Greystone Cellars building, which was built in 1889 in St. Helena, California, and placed on the National Register of Historic Places in 1978. In 1993, an earthquake-damaged Greystone was sold to The Culinary Institute of America, an independent, not-for-profit college offering bachelor’s and associate degrees in culinary arts, baking, and pastry arts, as well as certificate programs in culinary arts and professional wine studies. After $15 million in upgrades and renovations, in 1995 the CIA reopened Greystone as their California branch campus; the primary campus is in Hyde Park, New York.

The Christian Brothers’ winemaker was Brother Timothy, who was instrumental in creating the California wine industry as we know it today, and had a career spanning more than 50 years. Among his many interests, he was an avid collector of corkscrews, and his collection is on permanent loan
to The CIA at Greystone, and the inspiration for the Greystone Cellars wine labels.

With no ambition of being an estate wine, the grapes for this blend traveled west from Lodi and north from Santa Barbara. The trucks were filled with 77% Chardonnay and 23 % Chenin Blanc.

The wine presents itself in the glass with a light straw color. The nose features mango and lemon. These tropical markers continue in the taste, complemented with guava, lively acidity, and a somewhat contradictory creamy mouthfeel. The finish is short but smooth.

It starts out on the nose with understated aromas of vanilla and cream soda. The visual clues are a garnet color and delicate legs. The wine features flavors of tart cherry and blackberries, with a hint of pepper. On the palate, it is quite smooth, almost lush, but with a short, simple finish. Give this wine about 30 minutes in the frige before serving.

The technical details are: blend is 76% Cabernet Sauvignon, with the remainder Barbera, Malbec, Grenache, and Tempranillo. Aged in 26% new French and American oak. 30,000 cases were made.