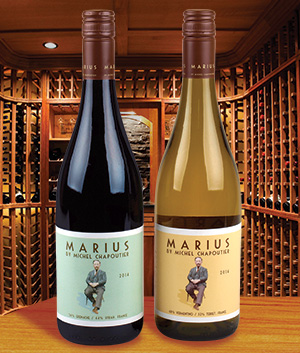 Languedoc-Roussillon (often called “the Languedoc”) is a historical coastal region in southern France, extending from Provence to the Pyrenees Mountains and the border with Spain. It’s now part of Occitanie. The area is a major wine producer, with Vin de Pays d’Oc and sparkling Crémant de Limoux among its best-known varieties. The regional capital, Montpellier, is home to a well-preserved medieval quarter.

It is in the Pays d’Oc that Michel Chapoutier produces his Marius wines, to honor the grandfather (that’s him on the label) that inspired in Michel a passion for quality winemaking.

Marius, son of Polydor Chapoutier who founded the family business in 1879, played a key role in the development of the wine enterprise, acquiring vineyards in the Hermitage area (from which Chapoutier’s most acclaimed wines hail) and constructing a new winery in 1929.

As a young man, Marius’ son Michel left the town of Tain l’Hermitage to study oenology at one of France’s best winemaking schools, and then moved to California for winemaking internships. In 1987, the prodigal son returned home to Tain, and began to improve and upgrade the quality of the wines and vineyards of the business which he by then oversaw.

As part of the Chapoutier commitment to quality and terroir, their vineyards are all managed to produce biodynamic wines. And, Michel is especially keen on the enjoyment of wine with food. “These are honest, deymystified wines—wines that bring people together,” he said.

This pale-yellow wine is a blend of 68 percent Vermentino (abundant on the French island of Corsica) and 32 percent Terret (whose home is the Languedoc, and is often used in Vermouth production). On the nose, citrus notes predominate, complemented by hints of peach. These continue on the palate, with flavors of green apple, lime, and pear at the fore. The wine finishes dry, with lingering fruit and lively acidity. Fermentation was carried out at low temperature in French oak.

Marius Rouge is a blend of 56 percent Grenach and 44 percent Syrah (Mourvèdre, which is often paired with these varietals, is MIA here.) Although the nose of this selection features aromas of sweet plum and vanilla, the taste is quite different. It is driven by tart cherry, cigar box, and minerals, and is complimented by robust tannins, good acidity, and a short finish. I suggest you serve it somewhat chilled; 52° F. should be just about right.

Some Mediterranean dishes that would go nicely with this wine include Niçoise chicken with tomatoes and black olives; braised rabbit with wild mushrooms, or veal shanks with artichokes.