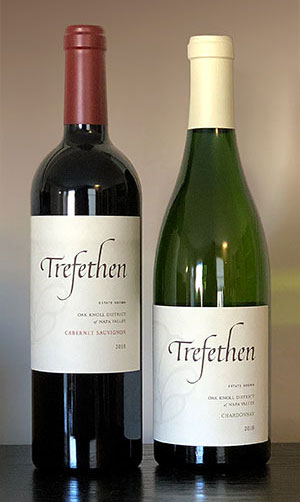 The pioneering Trefethen Family Vineyards is truly a rarity in the Napa Valley: a winery that grows, vinifies, and ages all of its wines entirely on the property, and has been helmed by a single family for three generations.

The area in which Trefethen is located is one of the oldest in Napa Valley’s wine history. Nearly 2,000 acres were originally purchased in 1851 by J.W. Osborne, who called it Oak Knoll. He planted grapes there the following year, and by 1860 had the largest vineyard in Napa, at 50 acres.

In 1886, banker brothers James and George Goodman founded the Eschol winery in Oak Knoll. The name was taken from the Old Testament,  Numbers 13:24, “The place was called the brook Eschol, because of the cluster of grapes which the children of Israel cut down from thence.” The original estate was 280 acres, with 40 acres planted in vineyards. The winery used a gravity-flow system: a horse-drawn winch brought grapes to the third floor of the three-story structure for crushing; gravity carried the juice to the second floor for fermenting; and, eventually, the wine descended to the first floor for aging. It is now the only surviving example in Napa Valley of a wooden gravity-flow winery from the 1800s. After struggling through Prohibition, by 1940 the winery building had fallen into disuse, although for a time in the ’40s Beringer Winery used the space as a storage facility and leased the surrounding vineyards. 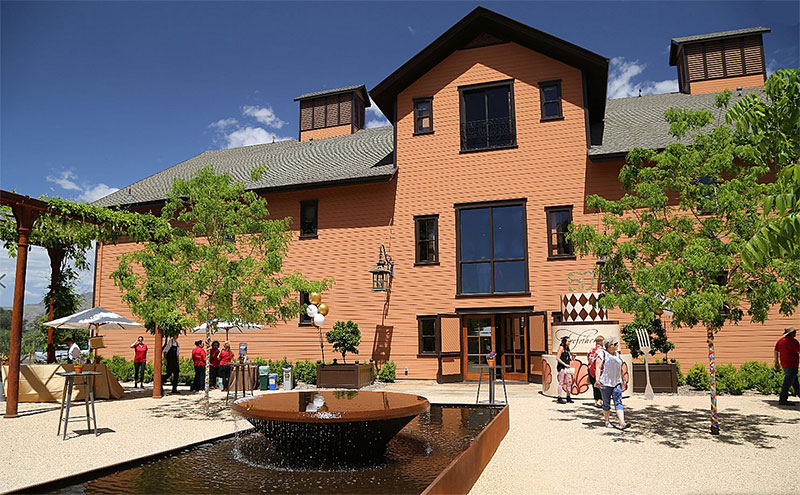 x
Following retirement from a successful career, including CEO, with Kaiser Industries, Eugene Trefethen along with his wife Catherine, better known as Katie, purchased Eshcol and six adjoining properties in 1968, with the goal of become genteel farmers.  They installed a robust water system that still serves the vineyard today, but neither of them ever wanted a winery.

The winery operation got going in 1973, the year the Trefethen’s son John and his wife Janet produced their first commercial vintage (2,000 cases of Chardonnay and Pinot Noir).  They also replanted the vineyards and restored the historic winery building.  Located at the end of what is possibly the longest winery driveway on the Napa Valley floor, it is the largest winery in the Oak Knoll district. 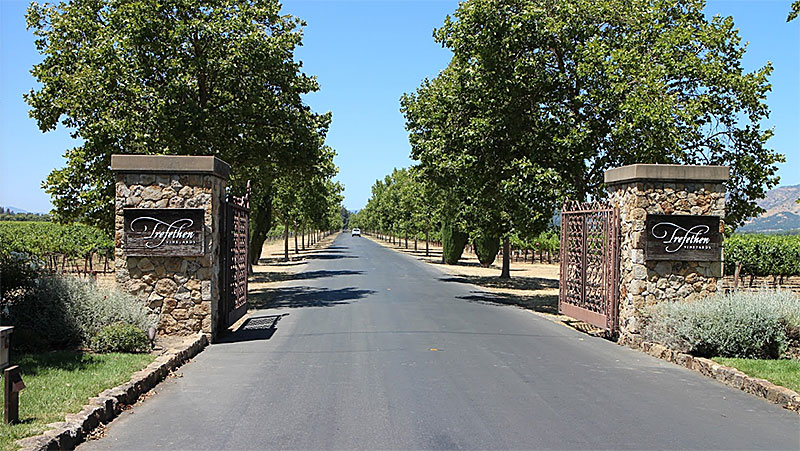 The trees were eventually planted to prevent John Trefethen from using the driveway to land his private plane. Photo: Carlin Arthurs

The Trefethens’ restoration efforts were recognized in 1988 by the Department of the Interior, which placed the winery on the National Register of Historic Places. The property is also known for an extensive garden established by Katie. It has been featured in many publications, and has been a destination for many gardening enthusiasts since it was created. 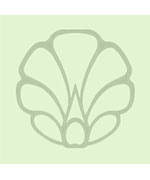 beginning. Katie had originally used it on signage in her garden areas, and the winery put it on the bottle capsules from very early on. It was long referred to as the “Welsh Flower,” thinking that Katie had tapped into her Welsh heritage. But later research couldn’t find any Welsh history for the mark, so its origins remain a mystery, and it is now just called the “Trefethen Flower” instead.

Eugene and Katie Trefethen’s residence, The Villa, is now used for special events. 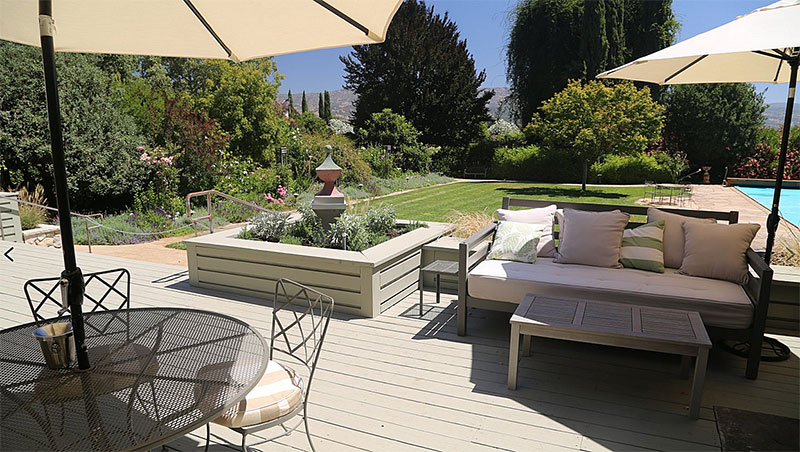 John and Janet Trefethen have 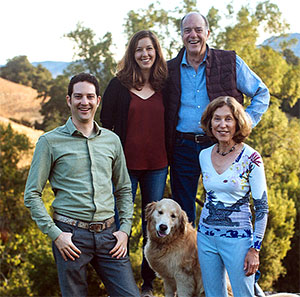 largely stepped back from day-to-day oversight, and the third generation of the family is now deeply involved in the operation. Son Lorenzo focuses on sales and marketing, and daughter Hailey on vineyards and employees.

In addition to the family, Jon Ruel has long been a part of the business.  He started as the viticulturist, 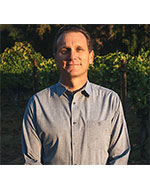 but steadily increased his involvement over the years that have followed. He is now fully responsible for all aspects of the company’s operations and strategy, and was named named CEO in 2015. He had this to say about Trefethen, ““As a true estate winery, we have the unique opportunity to bring integrity to every step of the process, from the soil to the table. My entire focus these days is on cultivating this extended family – and when we succeed, you  can not only taste it in the wine, you can feel it.” 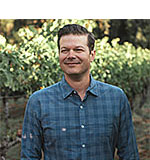 Winemaker Bryan Kays joined Trefethen in 2006 as a viticulture intern. Fascinated with estate-grown wines, he started in the cellar, and eventually worked up to the position of winemaker in 2015. 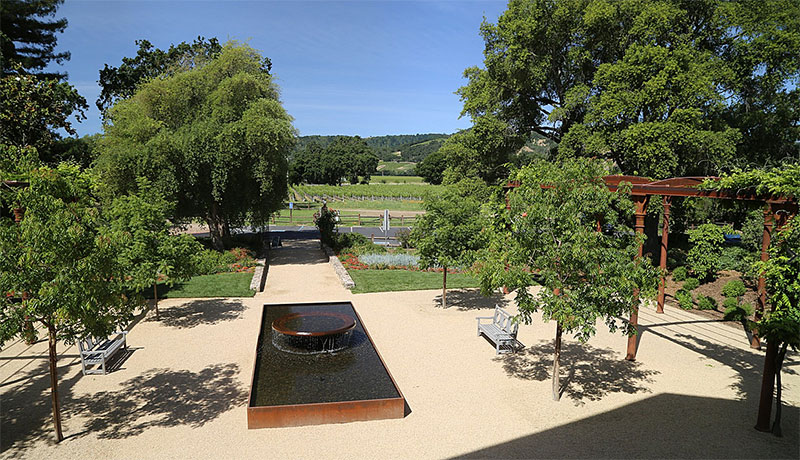 In 1979, a “Wine Olympics” was organized by the French restaurant guide Gault Millau in Beaune, France. A total of 330 wines from 33 countries were evaluated by 62 experts from ten countries. The 1976 Trefethen Chardonnay won first place in the category that pitted California Chardonnays against those from Burgundy, and was judged best in the world. This came three years after the more-famous “Judgement of Paris,” further helping to establish the quality of American wine in the world market.

The spirit of support and cooperation in northern California’s wine country that has been so much in evidence during this year’s wildfires goes way back.  Two now-notable wineries got their start at Trefethen. Cakebread Cellars purchased some grapes for their first vintage from Trefethen, and made their initial wine there. Domain Chandon (the American operation of the French Champagne leviathan Moët et Chandon) began their winemaking efforts by taking over the second floor of the winery while their own facility was being constructed.

The Vineyards and Environmental Commitment 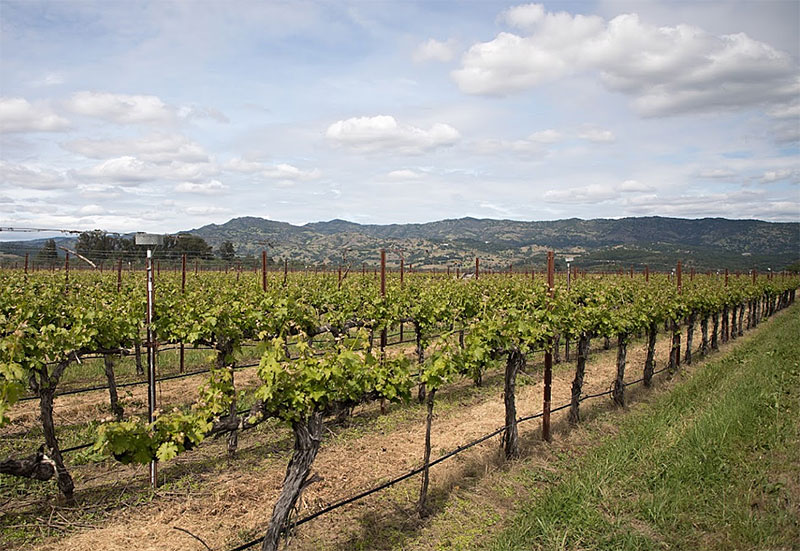 The original 400 acres surrounding the winery are known as the Main Ranch.  It sits on the largest alluvial fan in Napa Valley, where Dry Creek spills onto the valley floor and spreads gravel eroded from the Mayacamas mountains over clay and loam left by an ancient ocean. Over twenty different soil types have been identified in the vineyard, allowing Trefethen to grow nine different varieties there, all planted in their preferred soil.

Trefethen now also owns another 150 mostly hillside acres surrounding a spring-fed creek, the Hill Spring Vineyard, of which 40 acres are planted to Bordeaux varieties. It is about three miles from the winery in the foothills of the Mayacamas.

Although a relatively large producer (about 75,000 cases annually, but it varies with each harvest). Trefethen has farmed their vineyards sustainably since the beginning. They are all managed by employees, without outsourcing the work to a vineyard management company. A true “estate” operation, they have never purchased grapes from anyone.

Bluebirds, owls, and bats inhabit the vineyards. All of these species are native to the area and play important roles as natural predators. The property also attracts other birds of prey such as kestrels and red-tailed hawks. Cover crops provide habitat for beneficial insects, spiders, jackrabbits, and more, all of which play important roles in the ecosystem. Cover crop use also increases water infiltration as the roots create channels in the soil that can directly impact soil fertility via nitrogen fixation.

Every part of the grape cluster but the juice– the stem, skins, and seeds – is combined with clippings from the gardens and manure from the  stables to make a compost which is spread out into the vineyard each year.

The property includes two reservoirs. After collection, the water is transferred to biological settlement ponds, where the organic compounds are digested by bacteria, rendering the water appropriate for re-use in vineyard irrigation.

A number of solar arrays are on the property, providing power for the winery and production facilities. They were one of the first wineries to offset 100% of their electricity usage with on-site solar power.

As a major part of their commitment to ecological responsibility, Trefethen participates in a number of certification programs.

The Napa Green organization supervises two programs.  Land is an umbrella program that recognizes growers with validated environmental compliance and verified farm plans as meeting standards for watershed stewardship. Winery is one of only four sustainable winegrowing programs nationwide, offering the opportunity for comprehensive soil-to-bottle certification in both the vineyard and winery.

Trefethen’s highest-volume wine, this Chardonnay was 100% sourced from the Main Ranch. After both barrel and malolactic fermentation, the wine was aged for nine months in 13% new oak.

It is a pale straw gold in the glass. The nose presents aromas of lemon, lime, and grapefruit, plus a hint of peach. The smooth palate features these same flavors, as well as some lemon curd and just a suggestion of oak. It’s all wrapped up in a refreshing zippy acidity. The ABV is 13.3%, and 28,800 cases were produced.

This wine is a blend of 84% Cabernet Sauvignon (enough that it isn’t labeled a “red blend”), 10% Petit Verdot, 3% Merlot, 2% Malbec, and 1% Cabernet Franc, all sourced from the Main Ranch vineyard. It always amuses me when winemakers include 1 or 2% of something.  It’s hard to imagine how much difference that could make, but they certainly think it is worth the effort. After fermentation, it was aged for 18 months in 52% new oak.

This full-bodied wine is inky dark purple. The nose displays aromas of dark stone fruits, particularly plum, and earth.  These continue on the palate, with the addition of prunes and cocoa, plus a little vanilla.  There is well-balanced acidity, as well as plenty of grippy but nicely integrated tannins.  The ABV is 14.2%, and 23,880 cases were produced.

Note: Trefethen releases some of their red wines fairly young – if you have the patience, consider holding these for several years while they develop additional complexities and nuances.  But do as I say and not as I do; there was a time when I would have bottle aged a wine like this for 10 years or so, but I have largely abandoned holding bottles more than four or five years at the most, as I prefer the more up-front characteristics, especially tannins, of a young red.