Wikipedia says an “estancia is a large, private plot of land used for farming or cattle-raising. Estancias in the southern South American grasslands, the pampas, have historically been estates used to raise livestock, such as cattle or sheep. In Puerto Rico, an estancia was a farm growing frutos menores, that is, crops for local sale and consumption; the equivalent of a truck farm in the United States. In some areas of Spanish America, especially Argentina, they are large rural complexes with similarities to what in the United States is called a ranch.”

So much for the definition. In my opinion Estancia Cabernet Sauvignon is one of the greatest California wine values you can find. I’ve been drinking it for over thirty years, and it is consistently 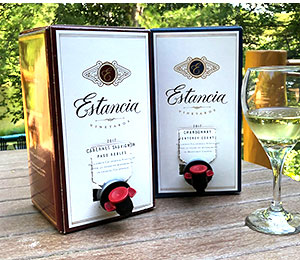 delicious and reliable. And I buy it by the case; the most recent one cost $84. Yep, that’s $7 a bottle, folks. Although harder to find, it’s available in a four-bottle-equivalent box for about $30 as well.

Estancia began in 1986 when Agustin Huneeus bought vineyards in the Monterey town of Soledad for growing Chardonnay and Pinot Noir. In 1999, he bought additional acres in the warmer Paso Robles 73 miles to the southeast for Cabernet Sauvignon, Merlot, Zinfandel, and other red Bordeaux varietals.

Huneeus started his long career in the city where he was born, Santiago, Chile. He entered the Chilean wine business in 1960 as chief executive officer of Concha y Toro. Although a small winery when he took the reins, Concha y Toro grew under his leadership to become Chile’s largest winery. In 1971, Huneeus reluctantly abandoned Chile due to the unsettled and difficult political climate of the time.

Salvador Allende Gossens became president of Chile in 1970. He was a Marxist physician and member of Chile’s Socialist Party, who headed the “Popular Unity” coalition of the Socialist, Communist, Radical, and Social-Democratic parties. Sadly, the nation’s economy suffered under Allende, and by early 1973 it had been battered by prolonged strikes by a variety of workers. A military coup finally overthrew Allende in September of 1973. As the armed forces bombarded the presidential palace, Allende committed suicide. The new government, led by General Augusto Pinochet Ugarte, hardly an improvement, was marked by human rights violations, the abolishment of civil liberties, and the erasure of the Allende administration’s agrarian and economic reforms. The junta jailed, tortured, and executed thousands of Chileans.

In 1985, Huneeus became partner and acting president of Franciscan Estates, where he oversaw Franciscan, Estancia, Mount Veeder, and Veramonte Winery in Chile. In 1999, he left that position and created Huneeus Wines, a company dedicated to fine wine properties. Huneeus is also the proprietor of Quintessa, one of the Napa Valley’s most highly-regarded wineries. 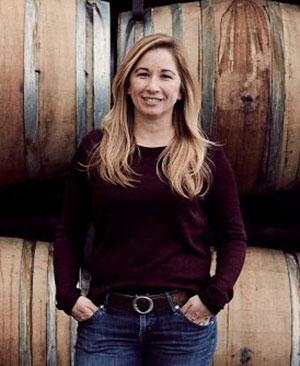 Monica Belavic has over 15 years of winemaking experience in California’s Central Coast. “At Estancia, I am able to continue my love affair with this region and experiment with many different varietals that this area is so keen to grow. I also have access to some of the most incredible vineyards and grapes in the area.” She has a BS in Food Science and Agriculture Business from Cal Poly, San Luis Obispo.

This vineyard features hot days and cool nights, a half-dozen types of meager soils, (including sandy clay loam), and stressed vines that yield tiny grape clusters with high skin-to-juice ratios that create deeply concentrated wines with intense flavors. This benchland vineyard is the source of Estancia’s Cabernet Sauvignon as well as Merlot and Zinfandel.

Tasting this wine critically was a challenge for me, since like I said, I’ve consumed a lot of it over the decades and knew exactly what to expect.  But, here goes: After fermentation, this 100% Cabernet Sauvignon from the Paso Robles appellation spent nine months in French and American oak barrels; 35% new. It is dark ruby crimson in the glass, with a bit of transparency. The nose offers up aromas of dark fruit, especially black cherry.  These continue on the tongue, with classic flavors of blackberry, black currant, and cassis, plus a hint of cocoa.  The acids and tannins are in good balance, and there is not an excess of either.