There is a long-extinct volcano that is part of the Mayacamas Mountains called Mt. Veeder, named for a Dutch Presbyterian pastor, Peter Veeder, who lived in Napa during the Civil War era and enjoyed hiking on the mountain, where the Douglas firs and Knobcone pines reminded him of the forests of home.

Commercial scale production arrived on Mount Veeder in 1900 when Theodore Geir, a colorful and flamboyant German-born Oakland liquor dealer, bought the property that would later become the Christian Brothers’ Mont La Salle Winery (today’s Hess Collection Winery). By that time, there were some 20 vineyards and six wineries on the slopes of Mount Veeder.

The modern post-Prohibition era began with the planting of the Mayacamas Vineyards in 1951 and the Bernstein Vineyards in 1965. Once the site of an old prune farm, San Francisco attorney Mike Bernstein and his wife, Arlene, purchased the property in 1963 to use as a weekend retreat, and planted a few vines two years later in the most casual way possible. A farmhand who lived on the property gave the Bernsteins a bundle of cast-off grapevine cuttings. As legend has it, Bernstein stuck the unrooted cuttings into the ground and promptly ignored them. Miraculously, of the 60 cuttings planted, 58 lived. In 1969, the Bernsteins purchased another farm a half mile up the road, which was turned into a five-acre vineyard planted to the classic Bordeaux grape varieties: Cabernet Sauvignon, Merlot, Petit Verdot, Cabernet Franc, and Malbec. Next came an actual winery, which produced 375 cases of Cabernet Sauvignon in 1973. By 1977, Mount. Veeder’s other Bordeaux varietals were ready for blending with the winery’s Cabernet; the 1977 Mount Veeder Cabernet was the first California Cabernet to be composed of a blend of all the classic Bordeaux grape varieties.  The Bernsteins were also the first in the state to produce a Meritage-style wine using all five grapes, like the great chateaux of Bordeaux

In 1982, the Bernsteins sold the operation to  Henry and Lisille Matheson, formerly of Miami, Florida, where Matheson’s family was very active in real estate. (His great-grandfather once owned the entire island of Key Biscayne!) A year earlier in 1981, the winery had retained a new winemaker, Peter Franus, who had worked previously at Chalone and Chateau St. Jean.

Unfortunately, Matheson was more adept at real estate than winemaking, and in 1989 the winery was sold again, this time to Agustin Huneeus of Franciscan Estate Selections, which owns Franciscan Oakville Estate, Estancia, and an estate in Chile known as Veramonte.  Huneeus and his team immediately set about making many improvements, such as retrellising the vineyards, providing drip irrigation so that the vines would not be over-watered, and installing a computerized press for the grapes. Changes were made in teh winemaking style to soften the aggressively tannic nature of the Mount Veeder fruit, and new barrels were brought into the winery.  Darice Spinelli became winemaker in 1993 after working for three years under Greg Upton, the senior winemaker who oversaw all the Franciscan Estates properties.

At the time of the sale Mount Veeder had about forty acres planted to vine, and Huneeus increased that by another fifty acres (called the North Ranch).  Production now centers on  four Cabernet Sauvignons, and two red blends. Total annual output is about 12,500 cases.

The whole operation is rather secretive.  Janet Myers is the current winemaker, but Mount Veeder provides no biographical information on her.  There is no tasting room (they used to pour at Franciscan, but that tasting room is permanently closed), and although the winery is now located in Rutherford, Calif., no address is available.

The Mount Veeder district was granted AVA status in 1990.  The boundaries of this appellation include 25 sq mi (64.7 sq  km) with 1,000 acres (400 ha) planted on thin volcanic soil. Many vineyards are found on the steep mountain face some as steep as 30°. The steepness of the angle gives the vineyards benefits of more direct sunlight and better drainage.

The philosophy at Mount Veeder Winery is that each  wine has its own way of expressing the mountain soil from which it was born. Mount Veeder asserts that great wines are a reflection of their terroir—the combination of soil, topography, microclimate, and people—and  that excellent grapes handled with minimal processing have the potential to produce the greatest wines. 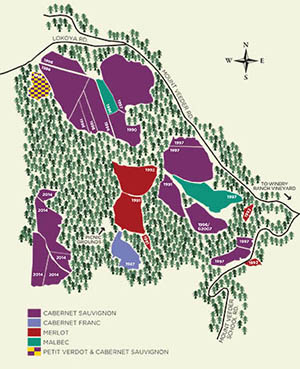 “The mountain is unforgiving, but only an environment this demanding offers the potential to cultivate such exceptional fruit. My mission is to be a true steward of this land, and to have that care come through in every glass of wine.”  — Matt Ashby, Vineyard Manager

Resembling a giant staircase, Mount Veeder’s vines are planted on wide terraces of earth cut into steep slopes. At elevations of 1,000 to 1,600 feet, the microclimate is very different from the Napa Valley floor. Above the fog bank, exposed to the gentle morning sun and protected from the afternoon heat by the surrounding mountains, grapes on these vines ripen slowly and evenly. 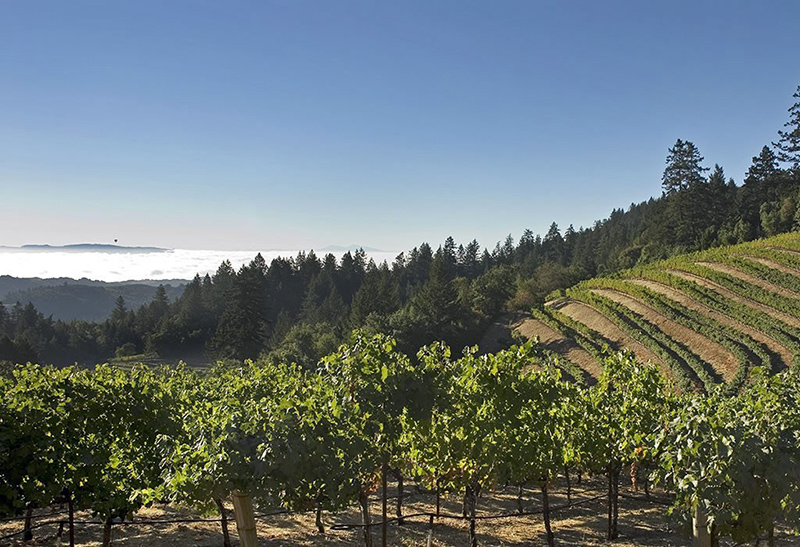 This Cabernet is classic deep ruby in color.  A blend of 86% Cabernet Sauvignon, 9% Merlot, 3% Malbec, and 2% Petit Verdot, it spent 20 months in French oak barrels. The nose is moderately aromatic, offering up ripe berries and black cherries, complemented by hints of cedar and dried sage.  The well-structured palate presents black cherry, leather, cassis, plum puree, and a bit of dust and cocoa.  It’s all supported with snappy tannins and just the right amount of acid.  ABV is 14.5% and 60,000 cases were produced.