In the 1970s, Portugese rosés such as Lancers and Mateus were the height of sophistication to many young wine drinkers: “It’s imported, and comes in a fun bottle!” With age comes wisdom however, and these wines were largely abandoned for the justifiably famous fortified wines of Portugal, Port and Madeira, produced by many ancient and famous houses.

Much less well-known is Portugal’s status as a producer of both red and white table wine, ranking in the world’s top ten in production.  With a population of just 10 million, but #2 in per capita consumption as of 2019 , much of that wine is sipped by the thirsty Portuguese.  (The U.S. is 44th out of a total of 167 countries.)

Winemaking in Portugal has a long and storied history. It was the first country to implement an appellation system, the Denominação de Origem Controlada, in 1756, almost 180 years before the French established their own similar system. The DOC established early quality-control standards, but because it has been in place for over 350 years much Portuguese winemaking is tightly bound by tradition; even calcified, some would say. However, this has been steadily changing, and many producers are updating their winemaking equipment and methods and are producing good high-quality wines.

This wine comes from the Douro [DOO-roh], a wild mountainous region located along the Douro river starting at the Spanish border and extending west into northern Portugal. The grapes for many Ports originate here also, but the vineyards for the table wines are at higher altitudes, where the grapes don’t ripen as fully or produce the higher sugar levels desirable for fortified wines.

In the 19th century, the area around the village of Pinhão was known as Vale do Bomfim, which translates as ‘the well-placed valley.’  The specific vineyard from which this wine comes was acquired by George Warre for Dow’s in 1896 (his family had been involved in the Port trade since its earliest years).  In 1912, Andrew James Symington became a partner in Dow’s and made Quinta do Bomfim his family home in Douro.  (Quinta is Portuguese for farm, estate, or villa.) 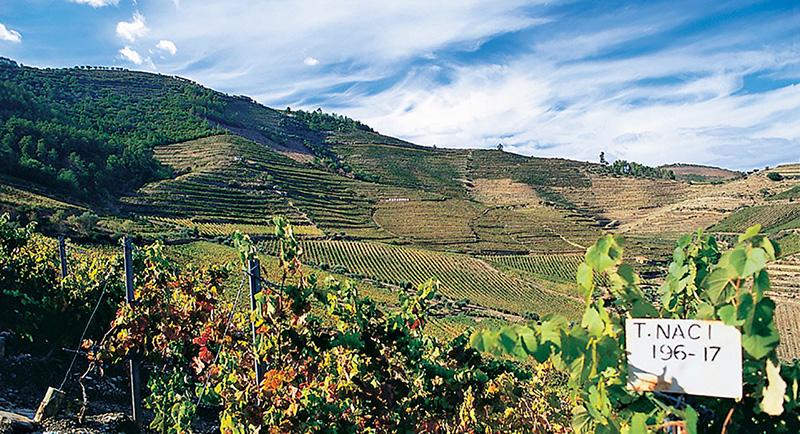 The Vale do Bomfim vineyard.

Quinta do Bomfim sits in the upper Douro Valley, located in an area of transition between temperate and Mediterranean climates. Predominantly south-facing with ample solar exposure, the terraced vineyards sit on schist, a medium-grade metamorphic rock formed from mudstone or shale.  The total property is 247 acres (100 hectares) with 185 acres (75 hectares) planted to vine.  The elevation varies from 262 to 1,260 feet (80 to 384 meters).

Historically, Portuguese wine was pressed by foot in granite treading tanks called lagares on the upper level of a winery, and then gravity sent the juice from the lagar to oak or chestnut vats for fermentation on another floor below.  The original winery at Quinta do Bomfim was modernized beginning in 1964 with the introduction of automated lagars to increase winemaking capacity, as increasing labor shortages made treading in stone lagares impractical and too expensive.   The automated lagar is an open stainless steel vinification tank in which mechanical treaders, powered by compressed air, replace the human foot in treading the grapes. It was designed to replicate the gentle treading action of feet and the configuration of the tank itself recreates the shape and the capacity of the traditional stone lagar. 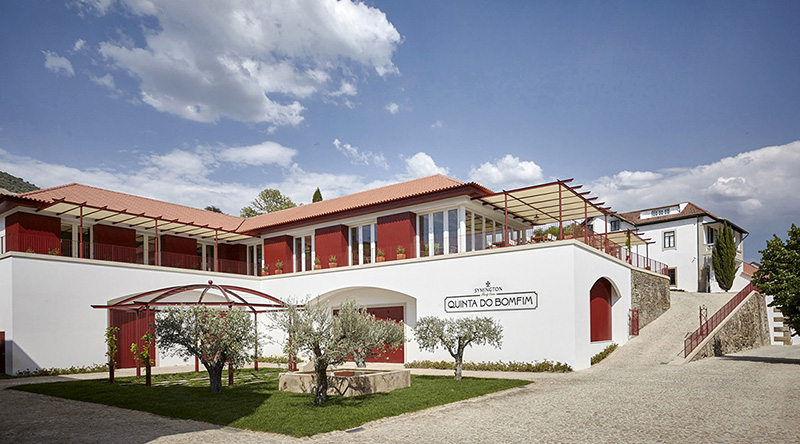 The Quinta do Bomfim winery.

This wine is made by Dow, one of the premier Port producers in the Douro Valley for over two centuries.   For many years it was only available to the family and their guests.  It is made from a blend of 50% Touriga Franca, 20% Touriga Nacional, and the remaining 30% is a field blend of indigenous varietals.  It was aged in an equal mixture of stainless steel and French oak (30% new for the half of the wine in wood) for six months.

The wine is a medium dark purple in the glass.  It is quite aromatic, wafting of dark fruits.  These continue on the palate, particularly black cherry.  But, it is perhaps predictably lean in the European style, so the fruit is complemented by slate, sage, and a bit of earth.  It is all bound together with racy acidity and moderate tannins.  ABV is 14%.