As you can see, Clase Azul tequilas come in some of the most distinctive bottles out there, made in the mountainous Mexican town of Santa Maria Canchesda, population 1,750. There, the 180 or so employees, 80% of whom are women who grew up in poverty and with little, if any, formal schooling, decorate each bottle by hand.  The entire production process takes about two weeks. And the cap isn’t chrome-plated plastic.  Oh no.  It is metal, that drinkers will often strike to produce a little ring after the pour.  “You may have heard people talk about ‘ringing the bell’ on their Clase Azul bottle, which was actually discovered quite by accident” mentions Brand Experience Specialist Saskia Iha. “In order to use a more sustainable material, we redesigned the cap which happened to make a ringing sound when tapped just the right way. We now consider this sound the ‘unleashing’ of the magic inside the bottle.”  Okay.

In addition to wages, the company compensates the artisans with two meals a day, transportation, daycare, and school tuition. The work they’ve provided has revitalized the local economy.

In recent years, Clase Azul boutiques have opened to sell  pottery as well as lamps, mirrors, and other products made from its ceramic decanters, all to “share the historical, cultural, and luxurious aspects of Mexico with the world.”  In addition, Clase Azul launched Fundación con Causa Azul, a non-profit organization that protects and promotes Mexican folk art. The foundation collaborates with artisan communities throughout Mexico and works to preserve traditional craft techniques like pottery and basalt stone carving.

Arturo Lomeli, who grew up in Guadalajara in the Mexican state of Jalisco, got into the liquor-making business in 1997 when he was 24. He and a friend named Hugo Luna Vazquez created a pomegranate punch they branded La Pinta. The next year they came out with a tequila called El Teporocho. Both promptly failed.

At loose ends, Lomeli went back to school in 1999 to study marketing. While there, he decided that the issue hadn’t been with the quality of his tequila, but rather with how it had been packaged and marketed. Vazquez disagreed, so Lomeli bought him out of the company and continued on his own.

The next year, Lomeli immersed himself in the arts of ceramic- and tequila-making, and in doing so, he became determined to make high-quality tequila and put it in bottles so beautiful that they would only be upcycled.

In the late 1990s, a Mexican telenovela called Azul Tequila was all the rage, and Lomeli had a crush on the female star, Barbara Mori. What better name for his tequila, he thought, than “azul,” the Spanish word for blue? Unfortunately, he discovered there already was an Azul Tequila.  So he arbitrarily added Clase, or Class, to create his new brand in 2000.

In 2002 his importer in San Diego presented Lomeli with a new contract.  It was in English, which he couldn’t read, so he reached out to Juan Sanchez, a childhood friend, brother of his first wife, and a banker, to translate.  After doing so, Sanchez told him not to sign; it would give the importer all rights to Lomeli’s business in the United States. Instead, they set up their own import company, Tequilas Premium Inc., which they used to import and distribute Clase Azul products to the United States for two years until 2005, when Southern Glazer’s Wine & Spirits, the world’s largest alcohol importer and distributor, picked up the brand. Within six months, sales had tripled, and Sanchez joined the company to manage its finances.

In 2019, Lomeli and Sanchez received a $1 billion offer for the company, but they said no. According to them, it has been more important to build a business on their own terms while supporting their community.  (Or perhaps a cool billion just wasn’t quite enough.)

Although Clase Azul offers eight selections, this Reposado is the mainstay of the line.  All tequilas must be made from 100% blue agave grown in Jalisco, as this one is of course. During the jima (harvest) the leaves of the plant are removed to expose its core, known as the piña. These piñas are slow-cooked for 72 hours in masonry ovens and then milled to extract the sugars that result from the cooking process and are the basis of fermentation with patented yeasts. The ferment is then double distilled in copper stills, followed by triple filtration. This Reposado is finally aged for eight months in second-use Jim Beam whiskey casks. Clase Azul says second-use barrels encourage a more developed flavor profile, while fresh wood can overwhelm the taste.

This Reposado is golden yellow, but somewhat paler than most. Plenty of agave on the nose, with notes of vanilla and oranges.  This is easily the sweetest tequila I have ever tasted, and I’m not sure that’s a good thing, especially considering the price ($170 at my local chain liquor store.) I’m sure hand-crafting those iconic bottles adds to the cost.  The sweetness hides much of the subtleties an aged tequila can offer.  That being said, the palate offers hints of vanilla and cinnamon, plus a smooth mouthfeel.

Because of the sweetness, this does make an excellent, if very expensive, Margarita.  At home, if you use two ounces of Clase Azul and an ounce of Grand Marnier (hey, let’s max things out, right?) those two ingredients alone are going to cost more than $15.  At a bar or restaurant, depending on how greedy the owner is, expect to pay $30 to $45 for the cocktail.

And, if you’re going to buy tequila at this price point, I recommend Jose Cuervo Reserva de la Familia or Don Julio 1942 instead (which I didn’t bother to review, because there is a ton of information about Don Julio and his tequilas on the inerwebs.) 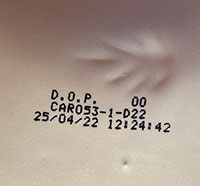 Note: While I don’t doubt the romance of the bottle story, there must be some industrialization in the production process, as this imprint on the bottom of the bottle makes clear.