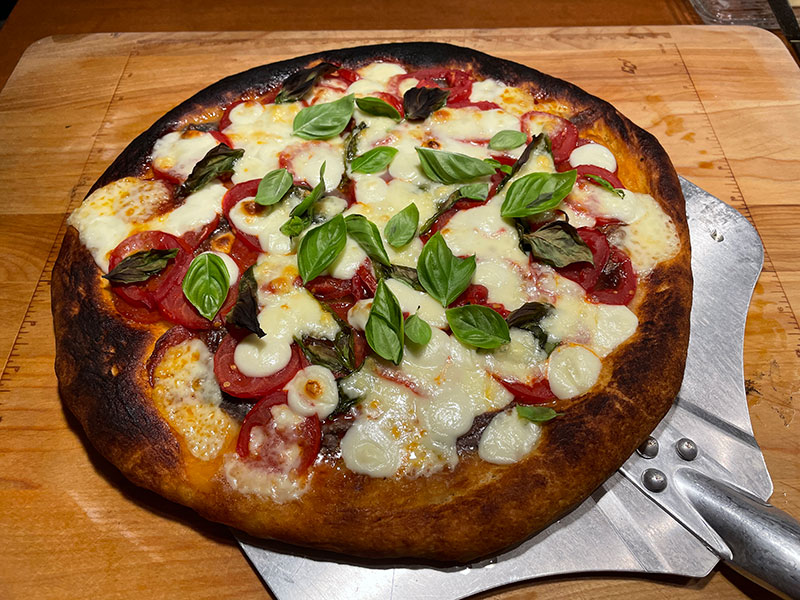 I have nine pizza cookbooks, and seven of them have  a recipe for Pizza Margherita.  In part this is because it is a classic, and in part because the story of its creation is clearly known and iconic.  In 1889, the Italian royal couple King Umberto and Queen Margherita paid a visit to Naples.  While there, local pizzaiolo Raffaele Esposito made three types of pizza for them: a marinara pizza with anchovies; a bianca (white) pizza with lard, provolone or caciocavallo cheese, and basil; and a pizza with tomatoes, mozzarella, and basil, featuring the red, white, and green of the Italian flag.  The queen was particularly delighted by that last one, and when Esposito received a note of thanks from her, he dedicated the pizza to her.

Although not traditional, for this pizza, I also used:
6 oz. sliced pepperoni
1 can of anchovies, drained

About an hour before dinner time, turn the oven up as high as it will go, preferably 500 degrees. Thirty to forty minutes before baking, roll dough out to 15” circle. [Or divide dough if you want to make two smaller pizzas.] Place on pizza screen if available, being careful not to press the dough into the mesh. With your fingers, press and form a 1/2 inch border around the edge.  Gently brush or rub the dough with the olive oil.  Cover with plastic wrap for this second rise.

Bake the pizza on the bottom rack of the preheated oven for 5 to 10 minutes, or until the crust is brown (as you can see, mine got a bit darker than I would have liked).  Sprinkle on the remaining basil leaves as soon as the pizza comes out of the oven.

I’m thinking only a true Italian wine should go with this, such as a Dolcetto, Barbera, or Montepulciano.

The dough for this recipe came from James McNair’s excellent New Pizza.  Don’t be discouraged by the one-star reviews, they are bogus, imho.  One dweeb complained that McNair didn’t cover such arcane techniques as cold fermentation.  Geez.  If you want a cold ferment, use room temperature water and let the dough rise in the refrigerator for 24 hours.  But, you’re not going to have pizza tonight, and you won’t taste the subtleties a cold ferment brings to dough under all those toppings.

The Margherita recipe itself is derived from one in The Ultimate Pizza by Pasquale Bruno, Jr., another quite reliable pizza book.