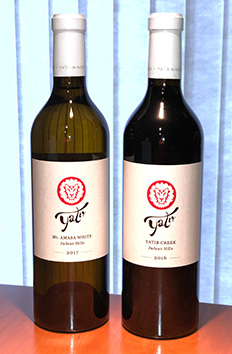 The Yatir region in the Judean Hills has produced grapes for winemaking since the ancient days of the Judean kingdom.  A large Jewish settlement existed in this region between the periods of the destruction of the Second Temple to the inception of the Islamic period.

Although the Israeli wine industry is 2,500-years-old, winemakers from this area of the Negev have only relatively recently been drawing critical and commercial acclaim.

David Ben-Gurion was the primary national founder and the first Prime Minister of Israel, which he led from 1948 until 1963 (with a short break in 1954-55).  He had a quixotic dream of making the Negev region in the south bloom and blossom.  When he decided to plant a forest in the area, he consulted with experts to guide him through the process. After numerous discussions and assessments, the agronomists determined that the region, which was predictably dry and warm, was unsuitable for planting trees. Ben-Gurion had other plans in mind however.  “Replace the experts!” he demanded.  A forest was in fact established, and it has gone on to become one of Israel’s largest . It was named after the Levite biblical city of Yatir, whose ruins remain within. The site serves as a “green lung” and a hiking site, as well as an experimental model for innovative methods for combating desertification. The Yatir Winery vineyards were planted as part of that effort.

Yatir Winery was established in 2000 as a joint venture between local growers and the Carmel Winery, who recognized the potential of the Yatir region. The Yatir Winery was built at the foot of the Israelite Tel Arad Fort (an archeological site), 10 minutes away from the vineyards.

Yatir Winery’s first wine was released in 2004, and today the winery produces 150,000 bottles. Over the years, this desert winery has become a symbol of the region.

Yatir’s  growers and winemakers are committed to excellence every step of the way – from growth and cultivation to harvest, fermentation, aging, and bottling – employing the most cutting-edge technology and equipment available to the industry today.

The vineyards of Yatir Winery are planted at an altitude of up to 900 meters [3000 feet] above sea level, and are scattered across various locations in the forest. The plots in these vineyards have varying soil compositions, with different slants and angles. The climate is characterized by cool, breezy mornings, dry days, cold nights (even at the peak of summer) and snowy winters. The soil is well-drained limestone, chalk, and clay that ensures low yields.

“We are proud to be planting in vineyards from an ancient region, where wine presses existed more than 3,000 years ago,” said Yaakov Ben Dor, Yatir Winery’s general manager.

“Although Israel’s winemaking tradition is ancient, the current industry is still young.  Israel has been widely recognized as capable of producing world-class wines, and growth is happening fast. We are pleased by the exciting potential of the region,” reported Etti Edri, Yatir’s export manager.

According to Eran Goldwasser, who oversees Yatir’s vineyards and production, “At Yatir Winery we are integrating state-of-the-art winemaking and technology within a man-made forest in the heart of the desert, to produce award-winning wines.  Though it seems unlikely, this area in Israel provides an excellent environment for wine making.  Due to Israel’s warm Mediterranean climate, the grapes have no trouble ripening.  As the vines age, yields will decrease, and our wines will become more nuanced.”

This blend of 76% Syrah, 12% Tannat, and 12% Malbec is plum red in the glass.  The nose offers aromas of rhubarb, cherries, cassis, and a hint of green olives. The palate presents flavors of recessive fruit, coca, and cigar box.  The  tannins feature a slightly salty and pleasantly bitter finish.  The wine was aged  for 12 months in large oak barrels,  and aged in the bottle for two years.

I suggest serving this wine with Moroccan chicken with preserved lemons and olives; souvlakia (skewered lamb) with grilled vegetables; or sghenna (a one pot meal for the Sabbath).

With an unusual blend of 52% Chenin Blanc, 39% Viognier, and 9% Roussanne, this  white displays a pale golden-greenish hue.   The aromas hint at grapefruit and actetone (which disappears after chilling).  That grapefruit is joined by peach, and pear on the palate.  There is a soft mouthfeel and balanced acidity.  The wine was fermented and aged for five months in a combination of concrete amphorae (a growing trend internationally), oak barrels, and stainless steel vats.

Or, if you’re not an observant Jew, you could do as I did and make a lobster and champagne risotto. 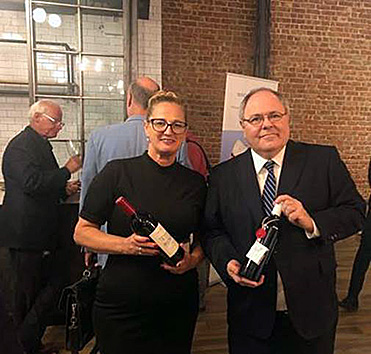 These wines are “kosher for Passover.”  This certification requires handling and processes unique to these types of wine.

Kosher wine is grape wine produced according to Jewish dietary law (kashrut). To be considered kosher, Sabbath-observant Jews must supervise and sometimes handle the entire winemaking process, from the time the grapes are crushed until the wine is bottled. Any ingredients used, including finings, must be kosher as well. Wine that is described as “kosher for Passover” must have been kept free from contact with chametz, such as grain, bread, and dough.

To ensure the kosher status of the wine it must be overseen by a Jewish authority who supervises the kashrut status of the producer. Generally, this supervisor will physically tip the fruit into the crush and operate the equipment. Once the wine emerges from the process, it can be handled in the normal fashion.