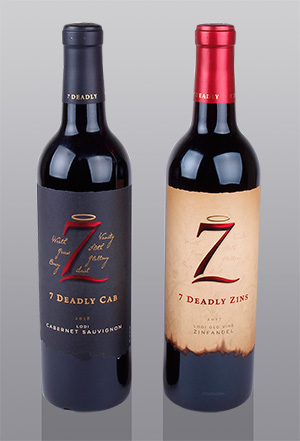 The Phillips family has been farming in Lodi since the 1850s, and cultivating wine grapes since the early 20th century. The founders of Michael David Winery are brothers Michael and David Phillips. They released their first commercial wine in 1984 under the Phillips Vineyards label after years of growing grapes for other wineries on over 800 acres of vineyards in the Lodi AVA. The brothers are fifth-generation farmers who “raised their families in the vineyard,” and they have been joined by Mike’s son Kevin and daughter Melissa as the family continues to thrive. “We, more than most, understand the importance of leaving it better than you found it for future generations. Our family legacy and love of Lodi drive our focus on sustainability,” declared Michael Phillips.

7 Deadly Zins was named one of Wine Business Monthly‘s Hottest Small Brands in 2004.  It grew to more than 250,000 cases annually in its first 10 years, and now annually sells some 300,000 cases. “It appealed to all demographics, young people and old people,” David Phillips said. “It was just one of those brands that took off and we got lucky with it.”

The operation was sold to The Wine Group in late 2018. You can learn more about their extensive holdings here.

7 Deadly Wines are sourced from the vineyards near Lodi, located in California’s Central Valley. The soil here is mineral-rich, free-draining, and sandy. The warm days and cool nights of this Mediterranean-like climate are considered ideal for Zinfandel and Cabernet Sauvignon.

Key to their commitment to sustainability, 7 Deadly has met the Lodi Rules™ certification, based on grower farming practices that benefit the environment, community, and local economy. Launched in 2005, this was California’s first third-party-certified sustainable winegrowing program. By 2014, over 20,000 acres were “Certified Green” in the Lodi appellation. Lodi Rules is among the most rigorous and comprehensive sustainable winemaking programs in the country. It dictates over 100 sustainable vineyard farming practices across six areas, including:
• Water Management to conserve water use for the vines’ water needs.
• Integrated Pest Management to maintain a natural habitat for enemies of pests.
• Air Quality Control to minimize dust, reduce air pollution, and conserve energy.
• Soil Fertility to maximize soil nutrition for more concentrated fruit quality.
• Land Stewardship helps to preserve native plants and protect wildlife habitat.
• Human Resources programs provide comprehensive employee training for job safety, efficiency, and advancement opportunities.

This wine, 7 Deadly’s main selection, was first released in 2002, starting with 700 cases of the 2000 harvest.  According to the winery, “7 Deadly was born from a Catholic school upbringing, and our winemaker’s lust for hedonistically seductive wine.  Seven certified-sustainable vineyards were chosen for the inaugural vintage.  The Seven Sins were related to the seven old vine Zinfandels blended to create 7 Deadly Zins, now America’s favorite Zinfandel.”

Clear and dark purple in the glass, this wine starts with aromas of dark stone fruit and leather.  There is plenty of traditional zinfandel pepper on the palate, abetted by tart cherry and racy acidity.  It ends in a medium finish, with a bit of cardamom bitterness.

That “Zins” pun just doesn’t work when you replace it with “Cab,” does it?  A peril of trying to overextend a clever marketing concept.  Regardless, the wine itself works pretty well.  It has the same dark purple color of the Zinfandel, with plum, vanilla, and a bit of marshmallow on the nose.  Flavors of blackberry and bing cherry follow.  It has a rather thin mouthfeel, but well-structured tannins and a moderately long finish. It is an approachable and easy-drinking Cabernet.  The 2020 is the first release of 7 Deadly Cab.